Recent publication: a brief overview of conservatism since 1789 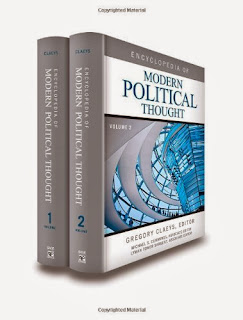 Thanks to the kind invitation of associate editor Michael Cummings, I contributed to the Encyclopedia of Modern Political Thought and authored the section on conservatism found on page 179. The full entry is below.

In the entry I cover the topic of global conservatism and not just the quasi-liberal, quasi-conservative ideology known simply as conservatism in the United States since the 1950s.

I cover the contributions of Burke, Joseph de Maistre, Klemens von Metternich and others, but I do also consider the tension between conservatism and laissez-faire liberalism in the United States and other Western countries.

Encyclopedia entry on Conservatism
Posted by Ryan McMaken at 1:11 AM