I was on Colorado State of Mind on Friday night. The topic was foreclosures.
Posted by Ryan McMaken at 9:47 PM

Interview on Channel 8 in Denver

Last April, I was part of a panel discussion on the housing market in the Denver area. It featured Zach Urban of the Division of Real Estate, Terry Ware of the City of Denver, and Tony Ormsby of the City of Aurora.

Here are some screen shots: 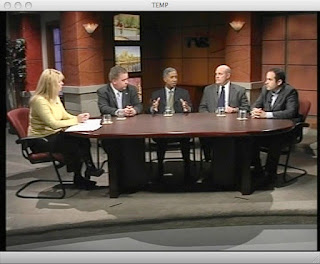 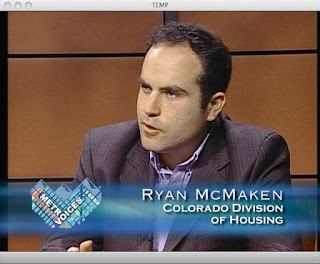 "No one really knows what anything is worth anymore"

[from my latest at the Mises Economics Blog]

"No one really knows what anything is worth anymore. Some sellers appear to be kidding themselves..."

So says David Whitford in this nicely detailed piece about real estate in Phoenix. Overall prices in Phoenix, by the way, are off 53 percent from the peak, and have seen the biggest decline in the nation.

There are some interesting contrasts in the piece. Notable is how at least some of the over-70 crowd wasn't caught up in the speculation and the bust. Those who are too old to be Baby Boomers weren't taken in by the profligacy of that generation. Says one 73-year-old: "If you're going to retire early, you can't have a lot of wives you're paying, you sure as hell can't have kids in college, and you can't have a lot of debt. You gotta get your debt down, get your bills paid, pay for your car. And then when hard times come, you don't participate."

I once had a Baby Boomer try to explain to me his theory of how it was smart to maximize mortgage debt for some reason or other. He probably won't be retiring any time soon.

But what struck me here was the section on how prices are all over the map in Phoenix. "Some sellers appear to be kidding themselves..." says Whitford, and this is hardly peculiar to Phoenix.

It's pretty clear that a great many sellers are still in denial about the current economic situation. And this includes banks who own foreclosed properties. Often, the banks are asking for the most ridiculous prices.

One real estate agent remarked to me recently that she has never experienced a time when people were so clueless about the true value of their homes. Banks will price foreclosed homes at 500K only to have them sell for 350K many, many months later. And this is in the relatively healthy market in Denver. Individual sellers aren't much better.

But can we be surprised when we have economists like those at Wells Fargo who recently declared that there will be economic growth in the second half of 2009, and that the recession will be history by 2010? Many have already convinced themselves that the next boom is already in place.

cross posted at the Mises Economics Blog
Posted by Ryan McMaken at 12:53 AM

[From the Mises Economics Blog]

S & P's spokesman declared that "we see no evidence that a recovery in home prices has begun."

These are March numbers, and I'm pretty sure that "popular" economists have been declaring the economy at bottom since at least March. We'll see what April numbers say, but the enthusiasm over the imminent recovery is perhaps misplaced.

With so few people qualifying for mortgage loans, and with so many people with terrible credit and massive consumer debt, it's difficult to imagine the scenario that will lead to all the excess housing inventory being mopped up any time soon.

UPDATE: The mortgage bankers association released new data today showing that mortgage defaults are in no danger of going down. As noted in the comments, it is of course a good thing that home prices are going down because that indicates that some of the malinvestment due to the bubble is being repaired. However, the malinvestment has been so incredibly bad, that the continuing decline in prices indicates that we still have a long way to go. As long as prices are moving down, it's a pretty good indicator that the bubble has still not been repaired and recovery is not on the horizon. What we need is a fast and steep fall in prices, but the bailouts ensure that we're in for a long, prolonged ordeal instead
Posted by Ryan McMaken at 6:52 AM