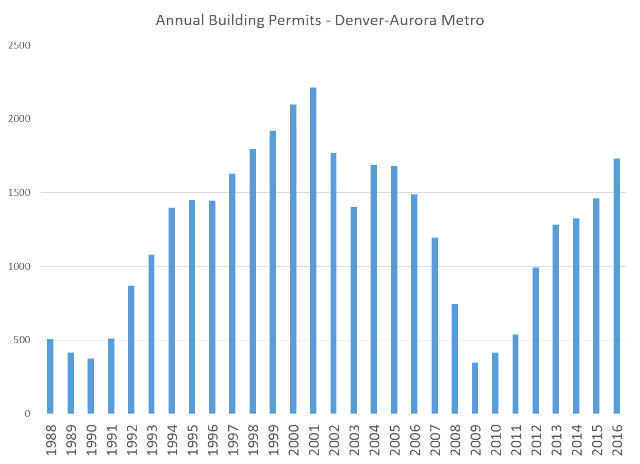 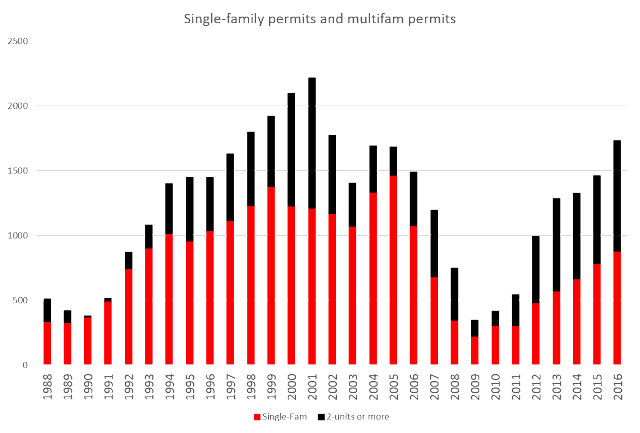 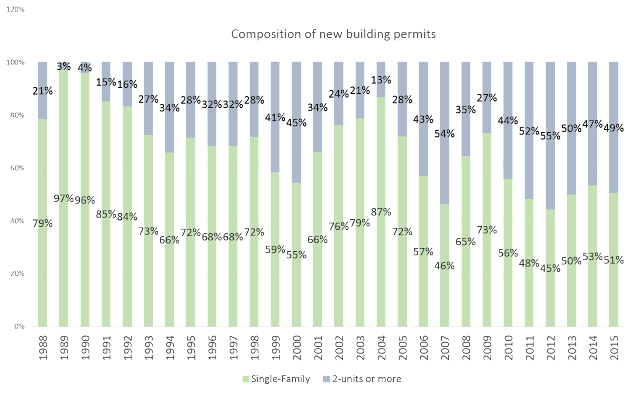 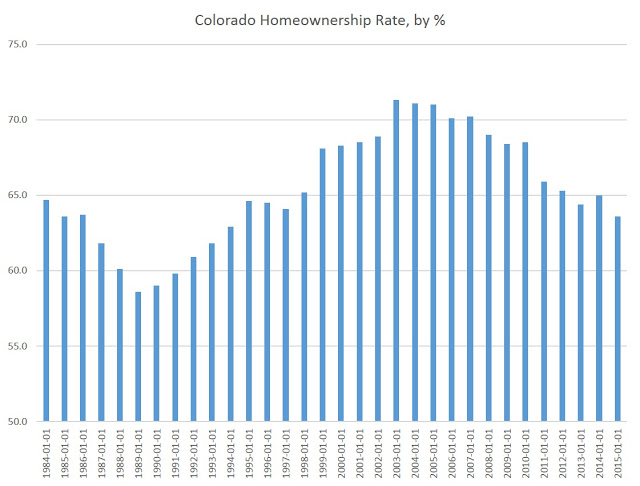 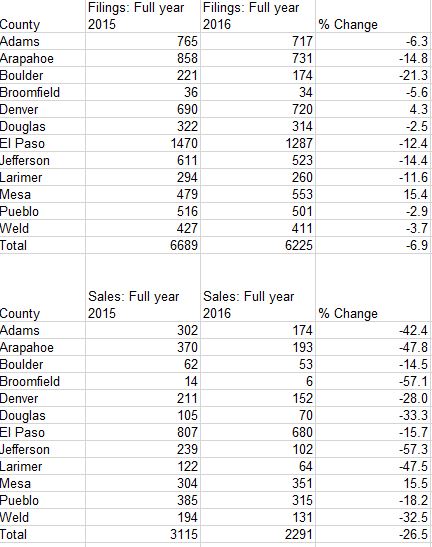 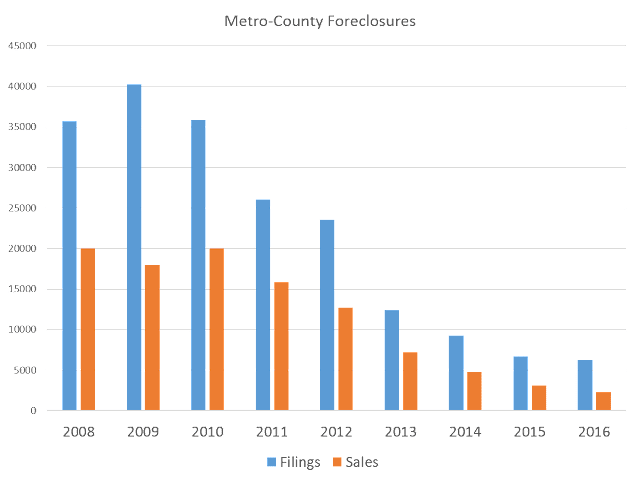 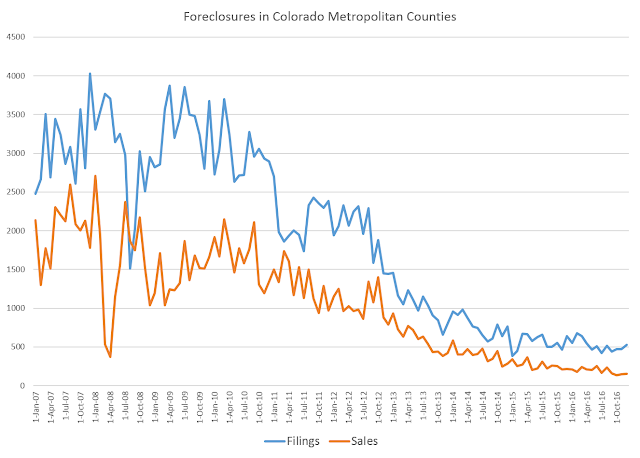 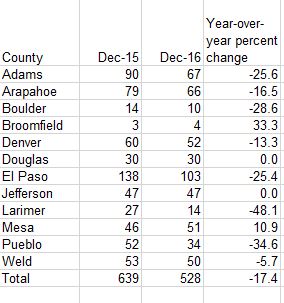 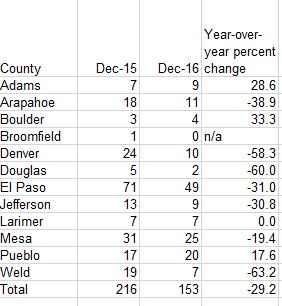 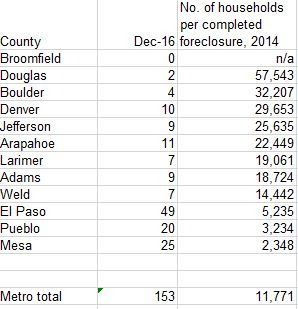 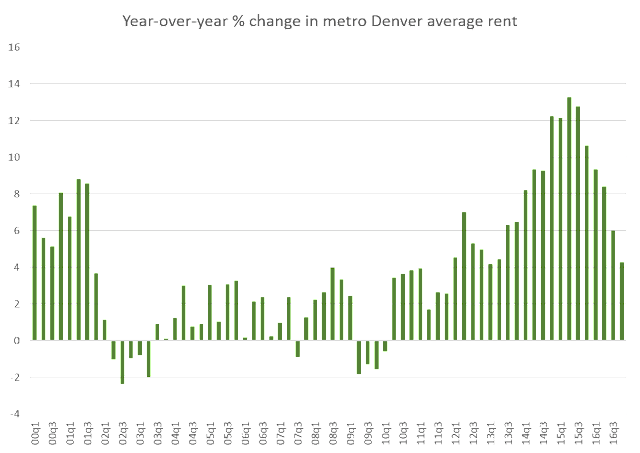 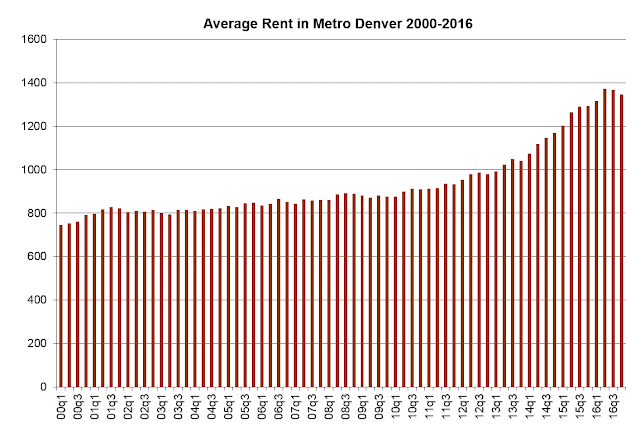 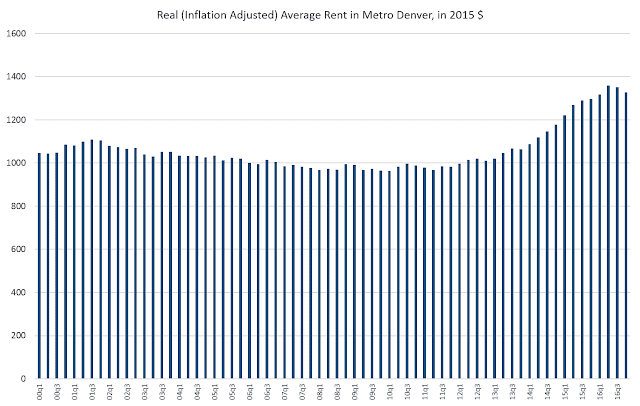 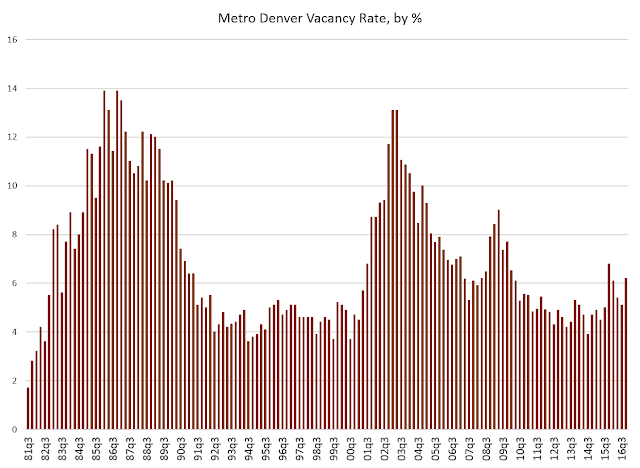 In Colorado, a release of a deed of trust occurs when a real estate loan is paid off whether through refinance, sale of property, or because the owner has made the final payment on the loan. Increases in release activity occur as refinance and home-sale activity increases, and rising release totals generally indicate increases in the demand for home loans and real estate.

Every quarter, I monitor release activity in 21 counties based on population size and to ensure that as many regions of the state as possible are represented. More than 90 percent of all occupied households in Colorado are within the twenty-one counties chosen:

Looking at all counties' measures, we find that during the fourth quarter of 2016, most areas reported increases in releases of deeds of trust: 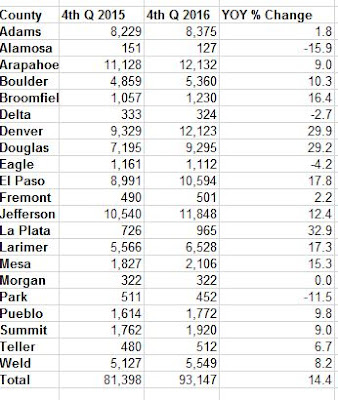 Year over year, the largest increase was in La Plata County and the largest decline was in Alamosa County.

Taking the year as a whole, the changes were less dramatic: 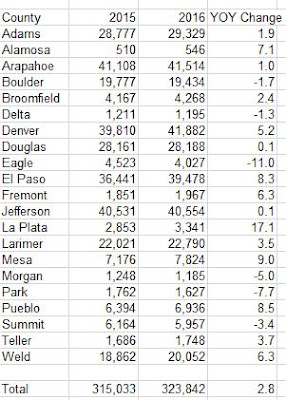 Statewide, releases were up 2.8 percent for the year overall. Again, La Plata County showed the largest increase, but Eagle County, in this case, shows the largest decline.

The fourth quarter of 2016 showed a sizable surge in release activity as can be seen in the first graph: 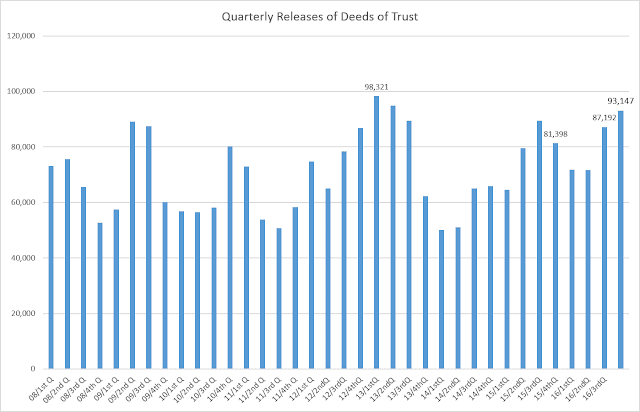 Although quarterly data only goes back to 2008, I do have annual data going back to 2000. Looking at annual data, we find that 2016 was not an especially remarkable year, in spite of the fourth quarter's surge: 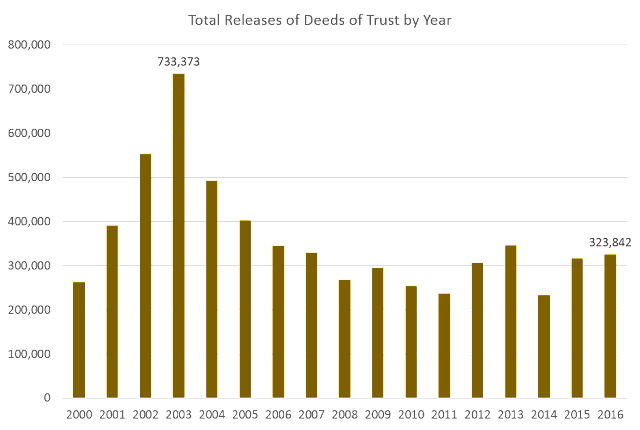 So where is release activity most concentrated? In raw numbers, we naturally expect the most activity in the most populous counties. However, when we adjust for the total number of households in each county, we find: 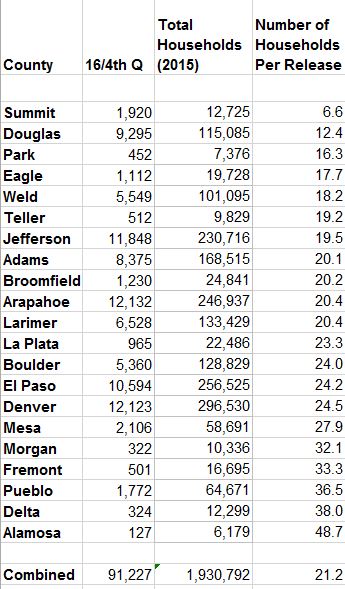 If we had to identify factors that lead to more release activity, we could likely point to median income and employment trends as factor, as well as overall demand for real estate in that area. There isn't a flawless correlation here, but counties like Douglas, Weld, and Jefferson continue to see fairly solid employment and income numbers while some counties at the bottom of the list — Pueblo and Alamosa Counties, for instance — tend to have lower incomes and/or less job growth.

This appears to still be the case, and we can see that in the quarters following declines in the mortgage rate, we see increasing release activity: 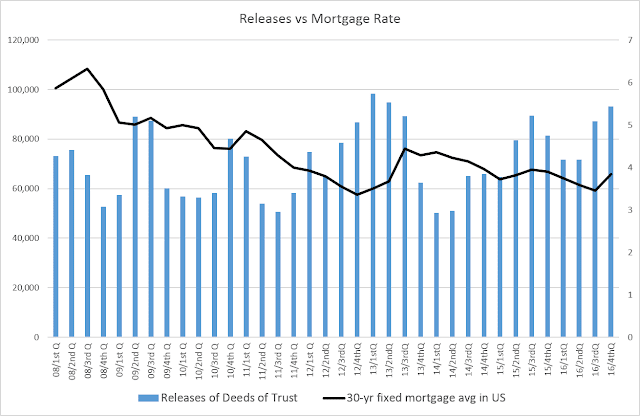 There is a lag here, so the 4th Q's surge represents the result of the overall decline in mortgage rates that occurred through most of 2016. Note also how in the quarters immediately following the increases in the mortgage rate in 2013, releases fell to a multi-year low.

In late 2016, mortgage rates began to climb and remain above four percent during the first quarter of 2017. This is likely to lead to a leveling off in release activity, although this may not be apparent until after the first quarter this year. Moreover, a continuation of strong employment trends may mitigate interest-rate-based downward pressure on home sales and refi activity — and prevent sizable declines in release activity as well.

Note on sources: all release activity is collected from the public trustee in each state listed. 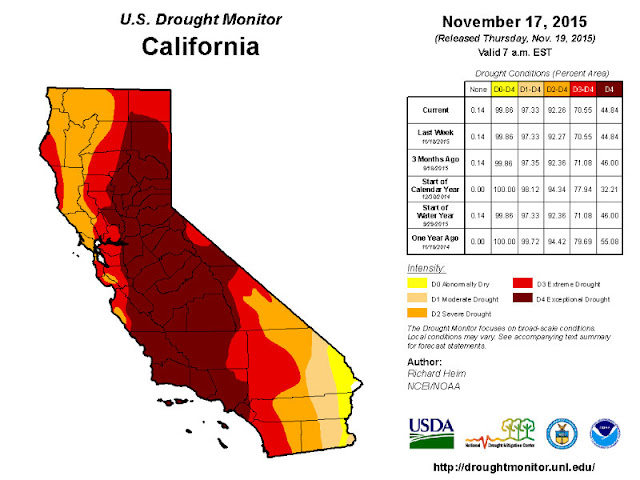 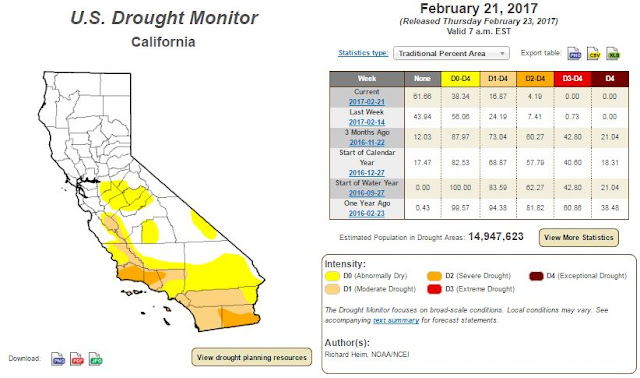 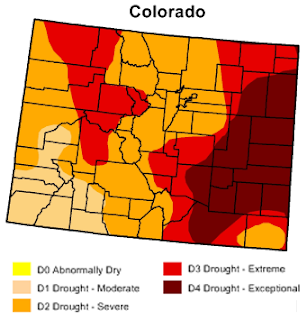 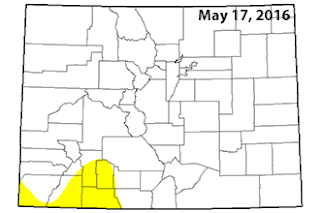 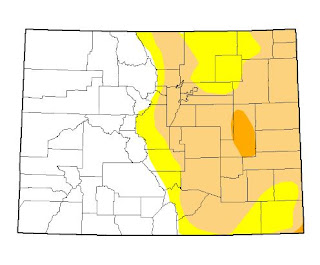 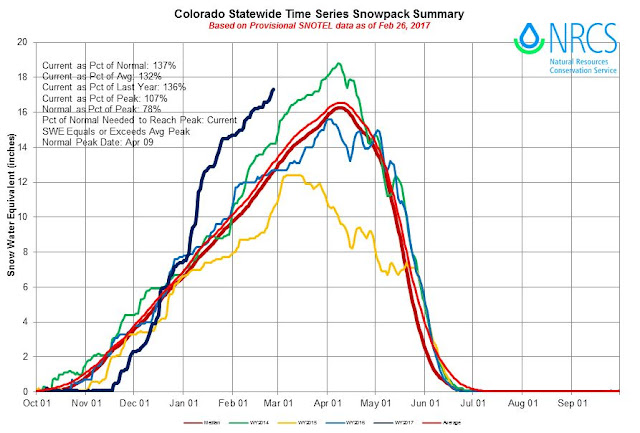