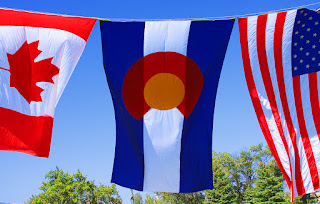 This week marks the 140th anniversary of Colorado statehood. That means the constitution of Colorado took effect 140 years ago this week, on August 1, 1876.

The state constitution has been amended many times since it was first adopted, but a look at the original constitution provides some interesting insights into the historical and political context of the time during which Colorado became a state.

Here are a few of them:

1. The government of Colorado was tri-lingual at first. The constitution states:


The General Assembly shall provide for the publication of the laws passed at each session thereof; and, until the year 1900 they shall be caused to publish in Spanish and German, a sufficient number of copies of said laws to supply that portion of the inhabitants of the State who speak those languages, and who may be unable to read and to understand the English language.

This provision is likely due to the influence of Casimiro Barela, a Mexican-born Coloradan from Trinidad who served in the Colorado Senate for 37 years after being a territorial representative and participating in the state's constitutional convention. Barela was known for being a spokesman for the Hispanic population of Mexico and for being mindful of the state's ethnic and linguistic diversity.

Spanish, of course, was commonly spoken throughout southern Colorado where the Arkansas River had marked the international border with Mexico until 1848. Traders and merchants in Southern Colorado at the time, such as the Bent family, tended to be bilingual in English and Spanish.

Moreover, in the late 19th century, the German language was commonly spoken throughout the United States and may have been the most-spoken language behind English. The language went into decline during World War One as American nationalists began to persecute German-Americans and forced the closure of some of the nation's numerous German-language schools.

2. Judges on the Supreme Court were elected and served fixed terms. Supreme Court judges today are appointed and subject only to removal through retention elections. At first, however, the Supreme Court was an elected body of three judges. Judges served nine-year terms. An amendment was adopted in 1966 mandating that the governor appoint justices instead.

4. The Constitution suggested that the General Assembly adopt laws allowing women's suffrage. The Constitution mandated universal suffrage for males over 21 years of age, but stipulated that the General Assembly at its first session "enact laws to extend the right of suffrage to women of legal age." Colorado would eventually extend suffrage to women in a state referendum in 1893. More than 25 years before the United States adopted women's suffrage at the national level.

5. Colorado practiced "declarant alien voting." During the 19th century, numerous states and territories granted the vote to immigrants who stated they intended to become US citizens. The Colorado text reads:

6. The Colorado Bill of Rights is extensive and detailed. Article II of the constitution contains 28 sections, all of which are devoted to outlining the rights of Colorado citizens in a manner similar to the US Bill of Rights. The list of much longer and more detailed than the national list.

The right of no person to keep and bear arms... shall be called into question; but nothing herein contained shall be construed to justify the practice of carrying concealed weapons.

Carrying a revolver in plain sight was apparently preferable at the time.

8. Slavery is specifically prohibited. Although the 13th amendment to the US constitution had already been passed a decade before, the Colorado constitution specifically states that "there shall never be in this State either slavery or involuntary servitude..."

9. The militia included most adult males. According to the constitution, "the militia of the State shall consist of all able-bodied male residents of the State, between the ages of eighteen and forty-five years." This reflected 19th century ideas of national defense in which semi-independent state militias served as the bulk of the land-based military forces in the US. Indeed, militias functioned as independent entities, and prior to the militia act of 1903, state governments could intervene to prevent the President of the US from calling up troops from the state militias, as had been done in the past by Vermont, Connecticut, and Kentucky.

10. The legislature was smaller at first. The House had 49 members and the Senate had 26 members. The constitution stated, however, that the total number of members in the legislature "shall never exceed 100." Needless to say, each vote counted for much more in 1880 than it does today. In 1880, with 47 members of the house, each House district had only about 4,300 people. Today in Colorado, each House district contains over 77,000 people, on average.

Image by "Beverly and Pack"
Posted by Ryan McMaken at 3:01 PM

Throughout most of 2015, the Fed repeatedly put off increasing the target rate, and then, feeling pressured to actually take action after many months of claiming it would take action, the Fed raised the target rate from 0.25% to 0.5% in December of 2015.

Since then, though, after months of claiming that the economy was improving, the Fed has refused to raise the target rate any further. The Fed was apparently spooked by what many would consider to be a fragile economy, although FOMC statements continue to contain phrases like "growing," "moderate" "gains" and other language that would lead one to believe that the economy is stable and strong.

The reality, of course, is something different which is why the Fed kept the target rate at 0.25% for seven years, and why is refuses to move above 0.5% percent. 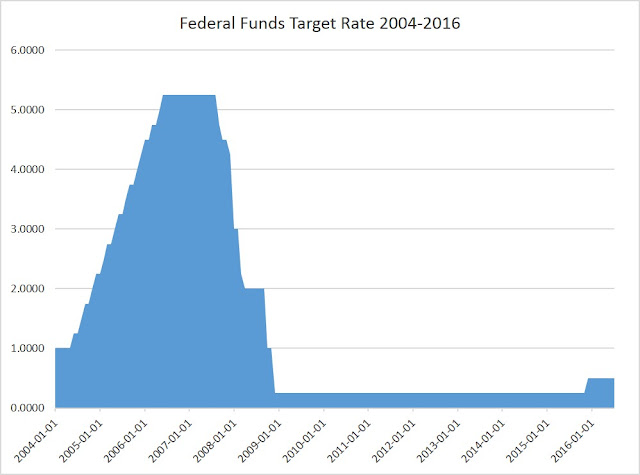 Meanwhile, Bloomberg asks the obvious question: Has the Fed become even more dovish?"

The answer is yes, for two reasons. First, there is fear that there is a slowdown coming. But secondly, and more importantly, the Fed is extremely unlikely to raise the target rate right before a presidential election.

For a longer historical view of the target rate, let's look at rates since 1992: 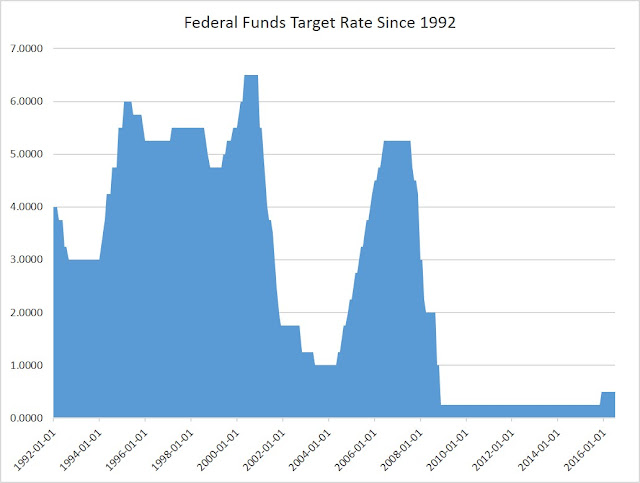 Note that the seven-year stretch at 0.25% was unprecedented, and the current rate at 0.5% remains below anything seen over the past three decades.
Posted by Ryan McMaken at 11:02 AM