It's unlikely that this is a seasonal softening, as the third quarter tends to be one of the tightest quarters of the year in terms of rental housing. We can expect further softening during the fourth and first quarters coming up.

Five percent is what the report's original author, Gordon Von Stroh, used to call "the equilibirum rate," since it's the rate at which you wouldn't say that the market is either tight or soft. This is a change from most quarters in the last two years, though. One would certainly say that a vacancy rate of 3.5 percent is indeed a tight market, as was clearly the case last year. There does appear to be real softening in the market right now, though: 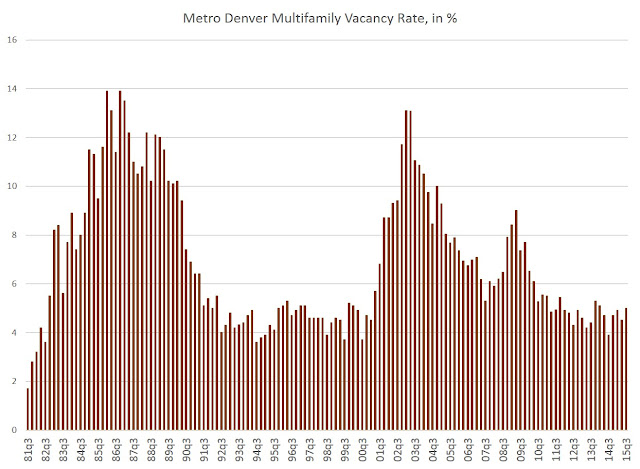 Note that the third quarter's rate of 5 percent was the highest rate recorded in six quarters.

I like to compare the vacancy rate to the unemployment rate as well, since there has historically been a connection between the two. Naturally, a hot job market tends to lead to a tight rental market since more people can afford to go out and found a new rental household without the need for roommates. Thus, more households are created and more units demanded. We can see the two curves move together in most cases. 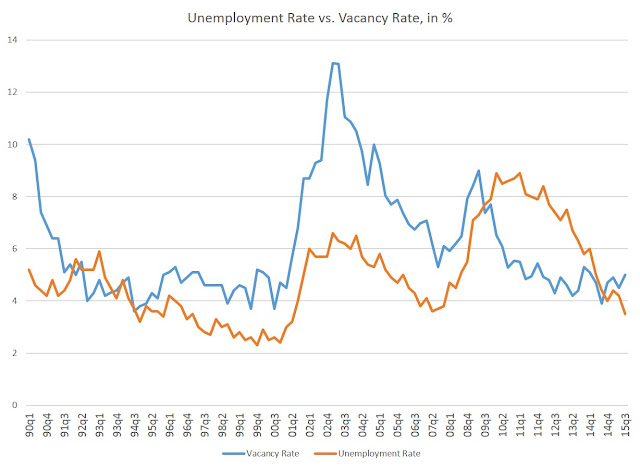 Thanks to sustained population increases in the metro Denver area over the past decade, the rental market tightened after 2010 even in the face of a very lackluster job market. As the unemployment rate declined, the vacancy rate moved quickly toward some of the lowest rates ever recorded.

The metro Denver vacancy rate rarely falls below 4 percent. Whether or not the current tight market can be sustained remains to be seen, however. As we'll see in other data, median household income growth in Denver has not been robust in recent years, and this will tend to put a damper on multifamily demand as people take on roommates or share quarters with other families.
Posted by Ryan McMaken at 2:40 PM 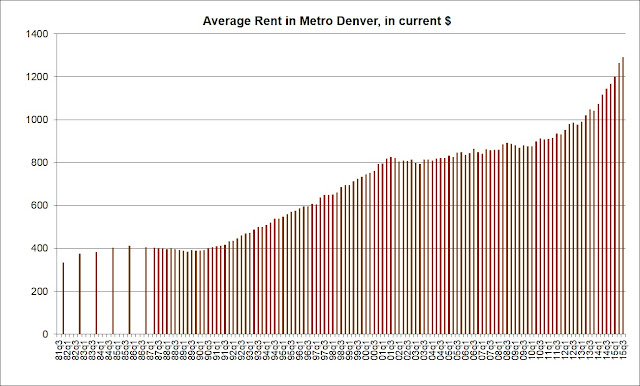 Year-over-year, the third quarter saw one of the largest growth rates ever recorded. During the third Q of 2015, the YOY change was 12.7 percent. That's down slightly from the second quarter's all-time highest growth rate of 13.2 percent: 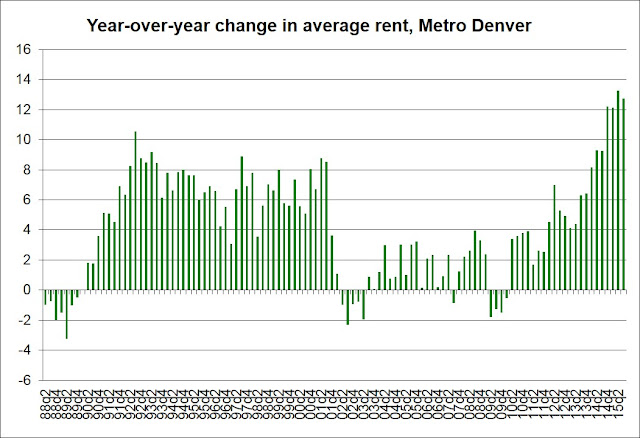 Although this graph only goes back to 1988, we'd still find that recent YOY growth is the highest ever, even if we go back to the earliest data recorded by this survey (which was in 1982). We can safely say that we're now experiencing the highest levels of rent growth seen in thirty years.

But what if we adjust for inflation? Is the rent really at an all time high? The answer is yes.  In this graph, I've adjusted the average rent data so that everything is in constant 2015 dollars: 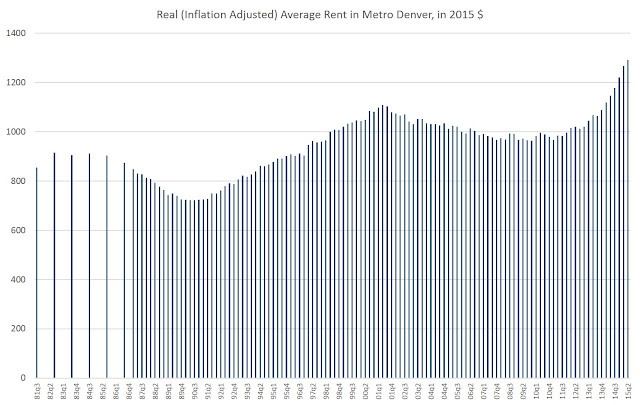 When we adjust for inflation, we find that real rents were fairly high even by today's standard during 2000 and 2001. Back in the 4th quarter of 2000, real rents had peaked at $1,085. They would not reach that level again until the 4th Q of 2013. Since then, rents have been regularly reaching new all-time highs.

Also note that rents were going down in real terms between 2001 and 2009. Those were the days when, in real terms, your rent actually went down when you renewed your lease. For now, renters are facing some of the biggest rent growth ever, both in nominal terms and in real terms.

This data is for multifamily rentals only. "Multifamily" means structures with more than four units.