From a Fox31 evening broadcast on April 29: 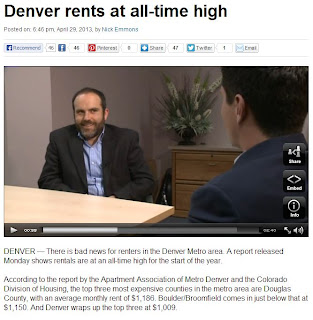 
Ryan McMaken is an economist for the Colorado Division of Housing, and says the latest spike in rent comes down to supply and demand. “Demand just continues to be significant here, and they’re really not building that much in the big scheme of things.”

McMaken says the metro area has seen an average rent increase of 4.2 percent from this time last year, while the vacancy rate is at 4.6 percent, a .3 percent drop off.

Even with the construction of new apartments in downtown Denver, McMaken says it won’t be enough to really offset demand, and rent prices.

“Yes, the number of new units has increased over 100 percent, easily, in the last couple of years.” But McMaken says, “If we look at the total numbers there, it’s just not really that much compared to how many units we have, and how many households are being formed.”

Randal O'Toole kindly quoted me in his book American Nightmare: How Government Undermines the Dream of Homeownership.  On page 2:

“Homeownership has let us down,” said Time magazine. “The dark side of homeownership is now all too apparent: foreclosures and walkaways, neighbothoods plagued by abandoned properties and plummeting home values, a nation in which families have $6 trillion less in housing wealth than they did just threee years ago.” When the Census Bureau reported American homeownership rates had fallen from 69 percent in 2004 to 65 percent in 2010, housing economist Ryan McMaken responded that “the present rate needs to drop even more.”

To put it in context, here's the article he's quoting.
Posted by Ryan McMaken at 2:15 PM