Although job growth has slowed in Colorado, the year-over-year change is still positive. That is, new jobs are still being created, according to the Establishment survey. The situation is a bit different in Grand Junction and Pueblo, however, where the latest Establishment employment survey shows that in December, total payroll employment actually went down, year over year.

Practically speaking, though, jobs were simply flat in both cases. In Grand Junction, for example, payroll employment was flat at 62,000 jobs with no change to speak of from December 2014 to December 2015. We do see a general trend of decline since early 2014: 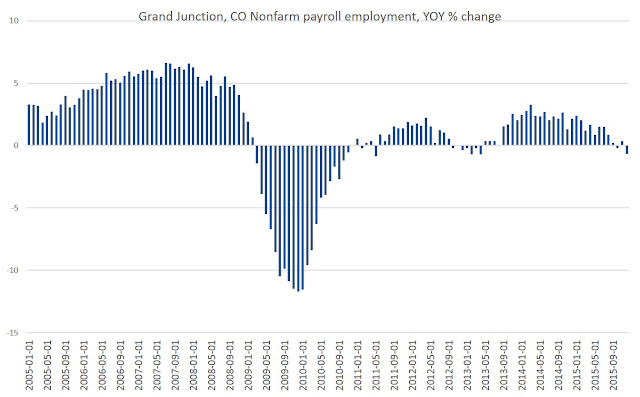 In Grand Junction, payroll employment growth hit 3.2 percent (a gain of nearly 2,000 jobs) back in March of 2014, but it's been declining since, and has been flat over the past four months. In fact, total employment in Grand Junction hasn't much budged from the 62,000 jobs mark for the past six months.

In Pueblo, payroll employment was also essentially flat at 61,000 jobs in December. Employment growth had reached 3.9 percent (a gain of more than 2,000 jobs) in February of 2015, but has been falling since (this is YOY change): 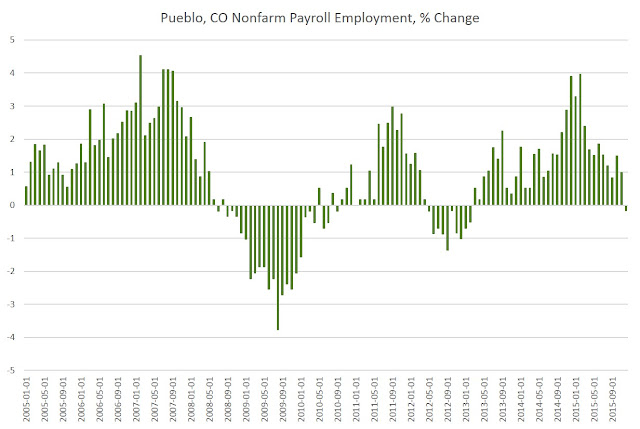 Historically, at least over the past 30 years, Pueblo has tended to have weaker  job growth than metro Denver and the state overall.

It's harder to generalize about Grand Junction, however, as GJ experienced enormous booms in the late 70s/early 80s, and also again from 2006 to 2008. GJ has seen lackluster growth ever since the 2008 financial crisis, however, and has in some ways not shared in the benefits of the expansion that has occurred in Colorado and the US since 2010.

(All data from the "Establishment Survey" which measures payroll employment for larger employers. This measure counts, jobs, not employed persons.)
Posted by Ryan McMaken at 11:31 PM

Colorado in top ten of states in well being index

Every year, Gallup releases its "Well Being Index" which measures the following:


Out of all US states, Colorado comes in fourth, behind first place Hawaii, then Alaska and Montana. Wyoming rounds out the top five for fifth place.

Colorado is in the top ten list, yet again. In fact, according to Gallup, "Hawaii and Colorado are the only two states that have made the list of the 10 highest well-being states each year since 2008."

The Western US in general is notable for having high well being scores: 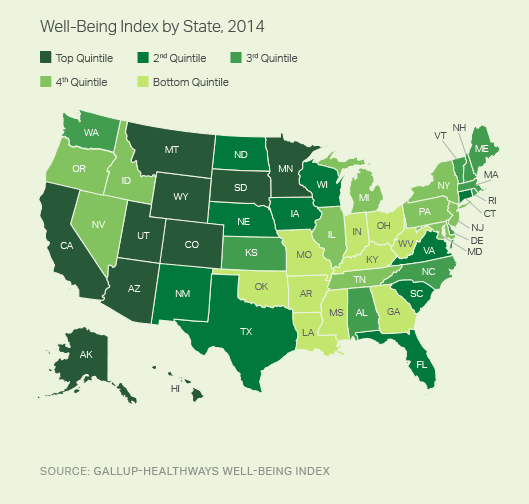 Why does the West do so well? Well, the stereotypes about Colorado and west are often true. There is a lot of entrepreneurship, physical fitness activity, and community involvement among Westerners. Moreover, homicide rates are low in Colorado (and also in Wyoming, Utah, and Montana) adding to the "community" measure contained within the index for those states.

Climate may be a factor as well. For example, New Mexico, in terms of statistical data, is nearly as unhealthy and low-income as Mississippi. So why does New Mexico rank so much higher by this measure? It may have something to do with perceptions of how much control one  has over one's economic life and physical well being.

See here for more on this from Gallup.
Posted by Ryan McMaken at 10:18 PM