I especially enjoyed this one: 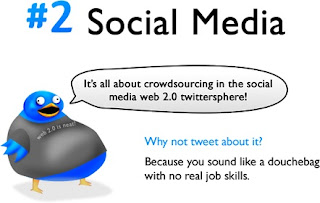 Translation: I don't have any actual knowledge about any actual industries. I just like to communicate about communications.

From The Oatmeal
Posted by Ryan McMaken at 11:19 PM

In the chart below, provided by chartoftheday.com, one can see how grim the job situation has become. The long term-trend experienced since 1961 has been abandoned for what can only be described as stagnation in job creation. As jobs remain flat, of course, the size of the job force will continue to grow as more young people graduate from college and secondary school. This is partly why unemployment among teens and twentysomethings is now about 25 percent.

Today, the Labor Department reported that nonfarm payrolls increased by 431,000 in May. It is worth noting that a large majority of last month's gain in payrolls was due to the hiring of temporary workers for the 2010 census. Today's chart provides some perspective on the US job market. Note how the number of jobs steadily increased from 1961 to 2001 (top chart). During the last economic recovery, however, job growth was unable to get back up to its long-term trend (first time since 1961). More recently, nonfarm payrolls have pulled away from its 40-year trend (1961-2001) by a record percentage (bottom chart). In fact, the number of US jobs is currently at level first reached in early 2000.

So far, the current "recovery" has produced a net loss of 133,000 jobs. During the same point in the last recovery (2003), the economy was adding 200,000 to 300,000 jobs per month. Calling the current situation a recovery is risible to anyone who is out looking for a job right now, especially since workers are now experiencing the longest periods of joblessness experienced in decades.

We can add to this the fact that the debt crisis in Europe has now spread to Hungary. So now, Greece, Portugal, Ireland, Italy, Spain and Hungary are all now facing serious debt crises and even risk of default. The European economy is in disarray, and investors were not pleased as the Dow plunged more than 300 points to below 10,000.

The homebuyer tax credits are gone, the stimulus is beginning to wear off, and there is nothing left that the feds can do to stave off another crisis since interest rates are already effectively zero and the federal government is more more broke than ever. State and local governments are in even worse shape.

Needless to say, this does not bode well for the "recovery."