The 4th Q 2015 vacancy and rent survey showed that vacancy rose to a five-year high while rents were flat from the 3rd Q of 2015 to the 4th Q. Year-over-year, though rent growth was still substantial.

The rent data released by the Apartment Association's survey, however, are just nominal rents, and are not adjusted for inflation. So, I like to take a look at rents in terms of 2015 dollars only, so we can compare more accurately with rents as they were in previous business cycles.

We know that nominal rents are currently near the highest levels ever. But where are they once adjusted for inflation?

Well, it turns out that even when adjusted for inflation, the average rent in metro Denver is still near all-time highs. 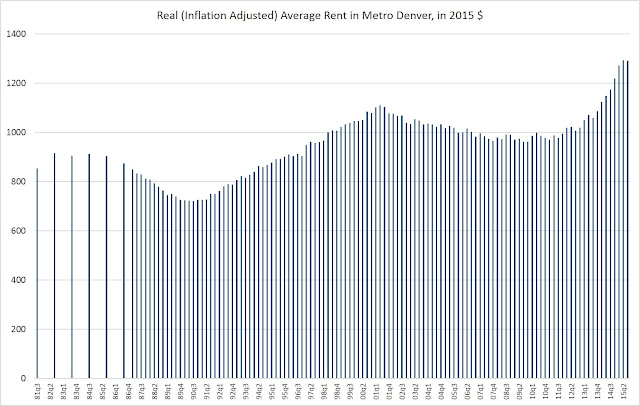 So, when adjusted for inflation, we do find that rents really do go down, as they did during the housing boom and many households were leaving rental housing behind for purchase homes. The foreclosure crisis and lackluster income growth since 2009 (among other things), however, has made rentals relatively more attractive in recent years, and rent growth has now surpassed the dot-com days.

As  a final note, let's look at  the unemployment rate versus the vacancy rate. Historically, the two have often trended together, and this was especially true before 2008: 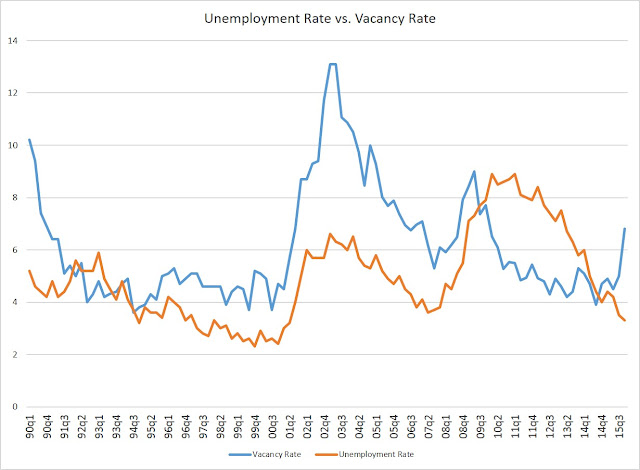 Since 2008, though, the vacancy and rent has become less sensitive to employment trends, perhaps due to a relative decline in the attractiveness of purchase housing, and the fact that household formation has tended to outpace multifamily construction in recent years. With the fourth quarter's sizable increase in vacancies, it is unclear if this signals a trend, although vacancy rate may be responding the the continued decline of job creation in metro Denver.

All data comes from the Apartment Association of Metro Denver's apartment vacancy and rental survey, and from the Bureau of Labor Statistics.
Posted by Ryan McMaken at 8:39 PM