The Colorado Blue Ribbon Panel on Housing met from October of 2004 to November of 2005. When it was created, the panel was the first statewide panel in 17 years to examine housing policy in Colorado.

In order to make the panel truly reflective of the many interests involved in housing in Colorado, it was my job to assemble members from the for-profit, government, and non-profit sectors in order for them to come together and produce recommendations on a statewide housing agenda.

Members were generally chief executives from the local for-profit sector such as owners of single-family housing construction firms and directors of economic development groups; or they were board members from professional associations like the Realtors Association; or they were government representatives like county commissioners, mayors, city managers, and members of the General Assembly.

I put together the monthly agendas, arranged the meetings, and ensured the members were satisfied with the progress being made. I screened presenters and arranged for informational presentations and developed the final recommendations. By the end of the process, the panel members can formed a cooperative group whose final recommendations effectively set the tone for housing policy for quite some time.

I wrote the final 60-page report which can be found here: http://www.dola.state.co.us/cdh/docs/bluerib_finalhousing.pdf

To provide an opportunity for more localized views to inform the Panel, I organized six local advisory committees known as roundtables. These groups represented six different regions of the state including mountain rural resort areas, the eastern plains, and southern Colorado.

In some cases I organized statewide videoconferencing to allow all groups to see each other, and I traveled throughout the state to meet with local representatives from each group. Most members of these groups were local elected officials or affordable housing officials from non-profit groups.

The Panel's report and conclusions eventually set the agenda for a statewide public policy agenda regarding housing and local government.
Posted by Ryan McMaken at 11:43 PM

Naturally, I always prefer to direct reporters to the Division Director when appropriate, but I'm often put in the role of spokesman.

It's often interesting to see how news gets reported. On July 18th, 2008, I was quoted in the Wall Street Journal regarding work I'm doing on foreclosures here in Colorado.

The article pits me against Realtytrac, a foreclosure tracking business out of California. In fact, Realtytrac and I worked out our differences months ago. So the article, while technically correct, is extremely dated. It's odd that they're publishing this story now, but it's nice to be quoted in the WSJ: 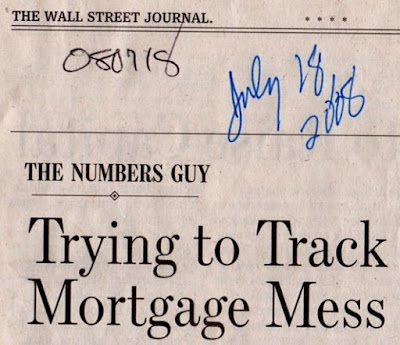 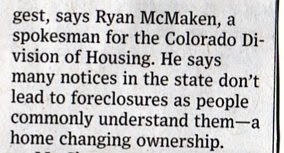 We have a pretty good relationship with the home builders: 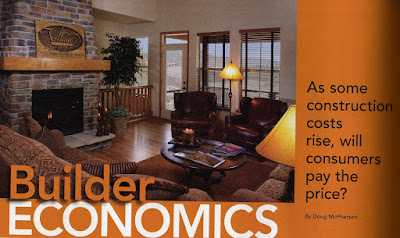 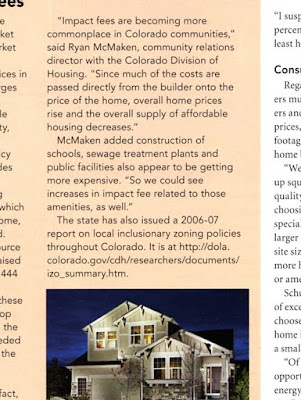 Why does this web site exist?

RyanMcMaken.com exists solely to provide an online location for information about my public affairs work in order to assist me when job opportunities present themselves. As time goes on, this page will become a more and more complete online portfolio.

I have chosen this blog format because the software allows me to make updates and add information with minimal effort. The service also provides hosting services free of charge, so I don't need to pay any monthly fees to keep this site online.

This format has certain limitations however, and I am unable to post PDF files or other document formats. Posted documents will be in JPEG format until a better, but equally cost-effective, solution is found.
Posted by Ryan McMaken at 10:20 PM

I've worked with legislation and policymaking from both outside and from within the government.

For four years with the student association, I worked primarily as a registered lobbyist, writing bills and amendments, lobbying the caucuses and the Joint Budget Committee on budget issues, and generally promoting positive relationships between the association and elected officials from the state government.

At the Congressional level, I've spent quite a bit of time doing joint events with members of Colorado's Congressional delegation and lobbying members and their staff on housing issues.

At the state level, I've planned numerous community events with members of the General Assembly while analyzing elections, legislation, and state budgets.

Here is a list of some of the legislation and public policies I've monitored, analyzed, or lobbied over the years:

Ryan McMaken is a public affairs professional with ten years of experience in lobbying, media relations, event planning, public relations, and economic analysis. Ryan is presently the spokesman and economist at the Colorado Division of Housing.

In 2000, Ryan became the lobbyist for the Colorado Student Association where he wrote amendments, authored legislation, and provided research and testimony for a variety of higher education bills. During the 2003 legislative session, Ryan authored House Bill 1175 which prohibited colleges from using a student's social security number as a student identification number. The bill was signed into law later that year.

Since 2006, Ryan has directed the marketing and public affairs agenda for the Colorado Foreclosure Hotline, the first statewide foreclosure hotline in the nation, and the most successful. Since its inception, Ryan has facilitated coverage of the hotline in USA Today, The New York Times, NBC Nightly News, and countless local television, radio, and print outlets. Ryan has also fostered partnerships between the hotline, the Federal Reserve Bank of Kansas City, and numerous national lenders such as Wells Fargo and US Bank.

As spokesman for the Division, Ryan has been featured on 9News, KOA Radio 850, La Buena Onda 1150 AM, and local radio in Greeley, Aspen, and Grand Junction.

Ryan has organized numerous call-in "Mortgage Line 9" events with 9News in Denver and with KOAA TV in Colorado springs.

Ryan places numerous articles quarterly with the business media throughout Colorado to publicize quarterly and annual reports on the housing industry in Colorado. Since Ryan joined the staff, Division of Housing staff members are now regularly featured as housing experts in The Rocky Mountain News, the Denver Post, The Denver Business Journal, The Northern Colorado Business Report, The Fort Collins Coloradoan, the Greeley Tribune, The Colorado Springs Gazette, The Pueblo Chieftain, and The Grand Junction Daily Sentinel. Positive press coverage of the Division is up about 1200 percent since 2004.

Ryan directs government relations for the Division, monitoring legislation that affects the Division, and offering amendments to pending legislation when necessary. Most recently, Ryan represented the Division in legislative conflicts over energy efficiency standards, tenant-landlord relations, and regulation of the mortgage industry regarding foreclosures.

Ryan has headed event planning as the Division has recently co-hosted over a dozen town hall meetings and public forums with Colorado state legislators and members of Colorado's Congressional delegation.

Ryan is currently an adjunct faculty member in the Social Sciences Department at Arapahoe Community College where he teaches Introduction to Political Science and American Politics.
Posted by Ryan McMaken at 8:10 PM

Please click on each page for the full view: 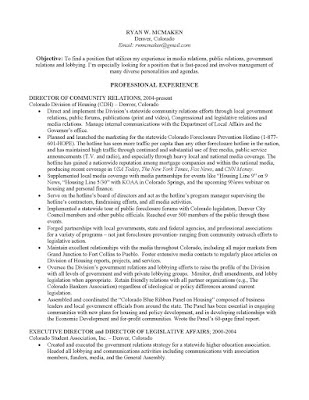 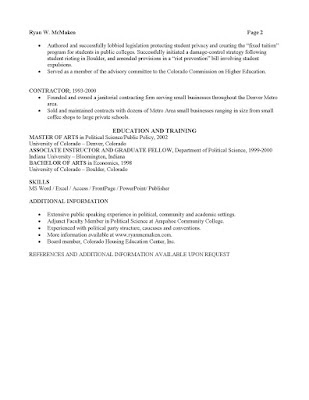 Click here for more information on Ryan's work on the Blue Ribbon Panel on Housing.
Posted by Ryan McMaken at 4:54 PM

Here are some examples of items like fundraising letters, press releases, op-eds, and reports.

Written work on legislative issues is available upon request, but I'm reluctant to post such communications online.

Here is an op-ed I wrote for the Realtytrac newsletter which is read primarily by real estate investors: 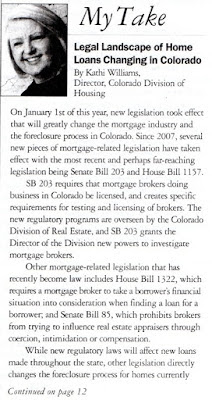 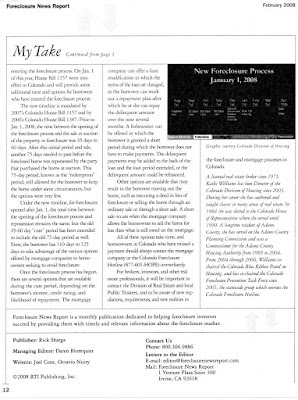 Here is a press release I wrote for our quarterly report on multifamily housing: 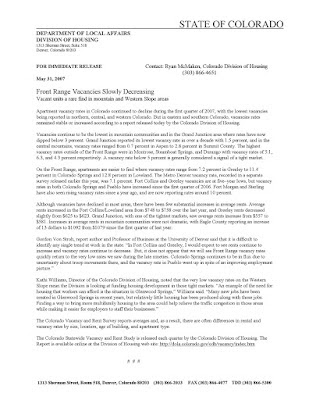 Here's is a release for our quarterly foreclosure report that I write (see below for the report itself): 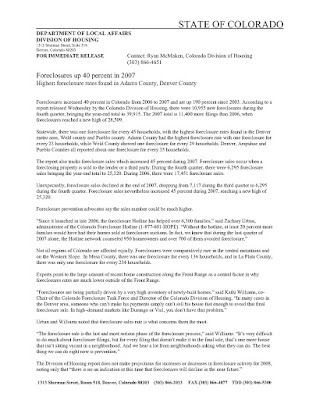 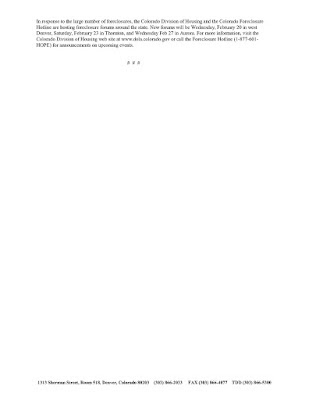 Here's another release for a different vacancy and rent report: 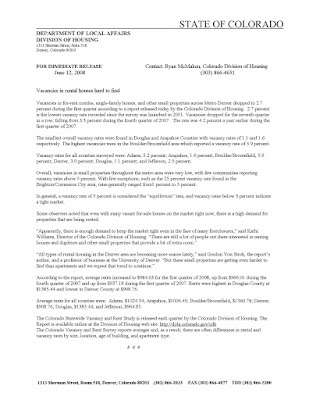 This is a fundraising letter to mortgage companies I wrote for the co-chairs of the Foreclosure Prevention Task Force. The Task Force has raised about $500,000 from the private sector: 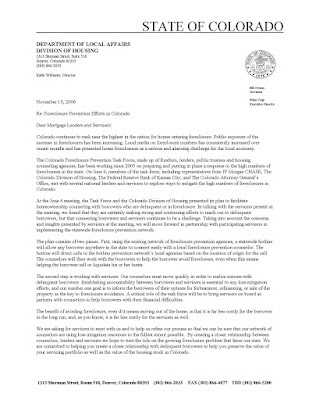 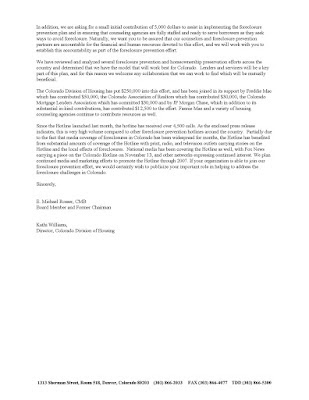 This is a portion of one of the quarterly foreclosure reports that I write: 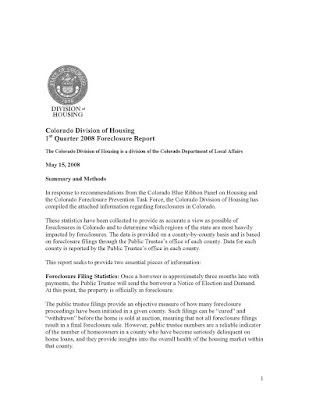 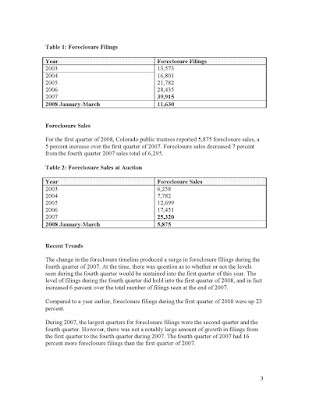 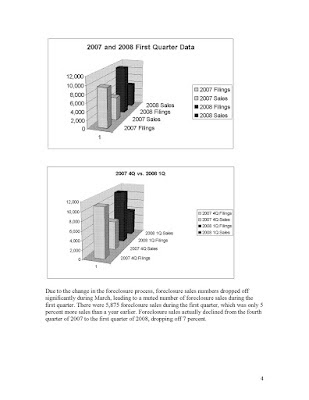 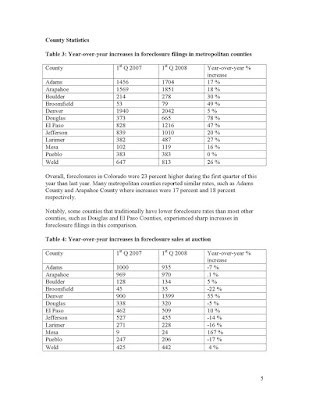 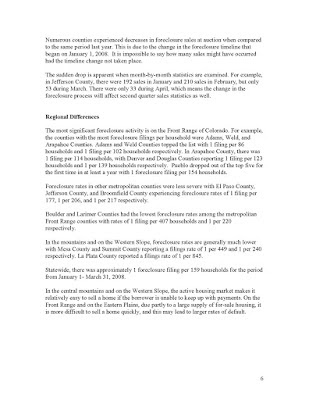 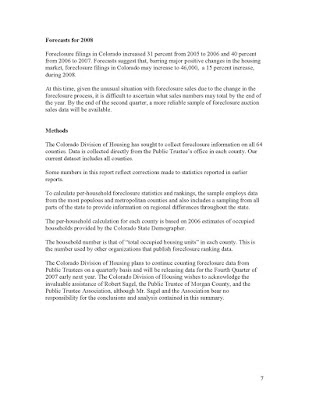 I'm not a graphic artist, but I can put together publications when absolutely necessary, as with the publications below. I've written the copy for all of the documents below.

This is a brochure: 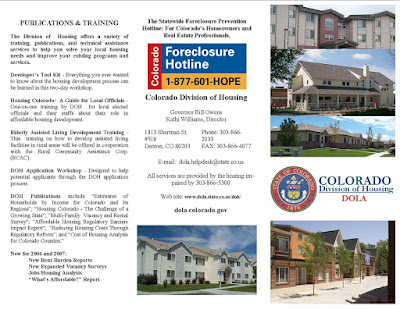 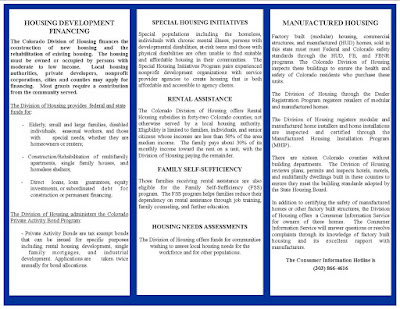 This is a full page informational ad for a trade publication for people within the factory-built housing industry: 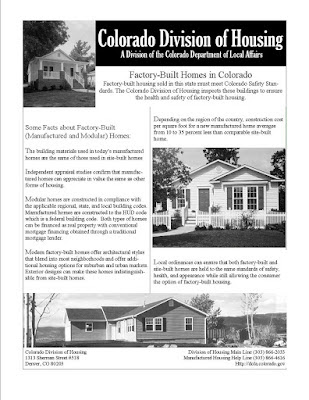 This is a "palm card" that is designed to be handed out or mailed. It is the size of a standard No. 10 business envelope. Many local governments and other organizations send this out to people in foreclosure: 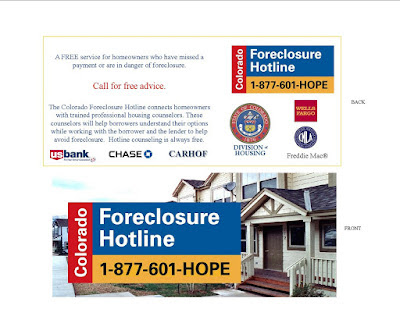 This is a flyer for a highly successful event I organized for 2007's affordable housing week. We had an overflow crowd, and a great panel as you can see: 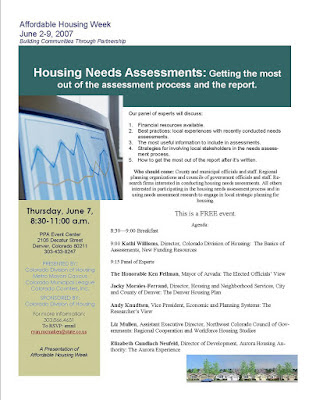 This is a flyer for one of our foreclosure town hall meetings. During 2008, I've organized about 12 of these in partnerships with various state, federal, and local officials: 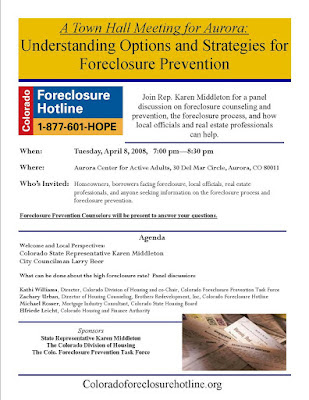