August is now behind us, and as a sign of the concern central bankers share over the weakness found in the world's major economies, there is no sign of any effort to rise target rates at central banks.
From the Fed to the European Central Bank, to the Bank of England and beyond, there appears to be no appetite for attempting to return to more "normal" monetary policy. We're apparently in a state of virtual permanency when it comes to "extraordinary" monetary policy which involves keeping the target interest rate at zero or near zero for years on end.
In fact, the only movement we've seen at a major central bank in recent days comes from the Bank of England where the bank cut the target rate from 0.5 percent to 0.25 percent. Except for that change, and continued declines in Australia, nothing has moved since last Spring: 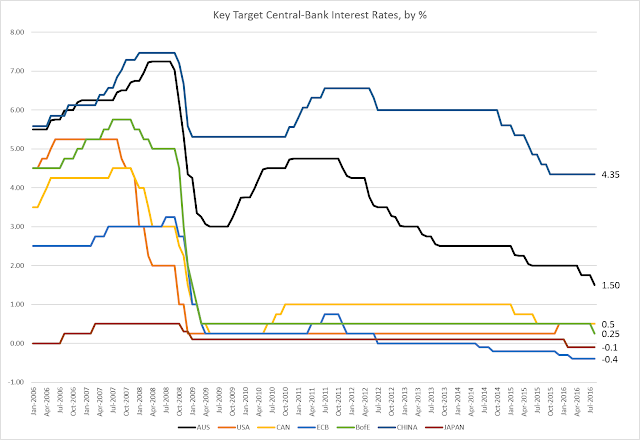 In late July, the Fed declined to raise the Federal Funds rate. But, of course, they maintained the usual posture of saying that a rate hike was just around the corner. Cutting through the posturing, Bloomberg wondered at the time if the Fed is becoming even more dovish.
Now, the Fed appears likely to do nothing at its next meeting. The Wall Street Journal avers:

[W]ith inflation holding below the Fed’s 2% target and the unemployment rate little changed in recent months, senior officials feel little sense of urgency about moving and an inclination toward delay, according to their public comments and recent interviews.

This comes just weeks after the Bank of England cut its key interest rate to the lowest rate of its 322-year history, dropping the target rate to .25 percent.
The given excuse for this was the chance that Brexit might lead to an economic slowdown. Thus, according to BofE Governor Mark Carney:

“There is a clear case for stimulus, and stimulus now,” Mr. Carney said at a news conference, in the latest attempt by officials to reassure Britons that they are acting decisively.

Meanwhile, as one looks around the central-bank landscape, one is left wondering what central banks will do when something really goes wrong. With rates all already so close to zero (or even below zero) any serious economic disruption, such as an obvious recession, is increasingly likely to lead to helicopter money, negative rates, or an intensification of attacks on cash, such as that found in Ken Rogoff's recent book The Curse of Cash.
Another possible route to "stimulus," of course, is good ol' fashioned fiscal policy such as spending on public works and other types of government spending.
The European Central Bank urged European governments to do as much last week when ECB president Mario Draghi sang the praises of government stimulus and criticized Germany for not spending enough.
The European economy overall is so weak, though, that projections suggest that even with massive amounts of monetary stimulus, price inflation will not reach the ECB's 2 percent target any time soon. With its credibility on the line, however, the ECB appears reluctant to cut its deposit rate even further below negative 0.4 percent, or its MRO rate below zero, where it already sits.
"Wait and see" appears to be the approach for now.
Note:
Through August, here are central bank target rates and resources:
The rates used for this analysis are:
Here's a look at recent changes in closer detail: 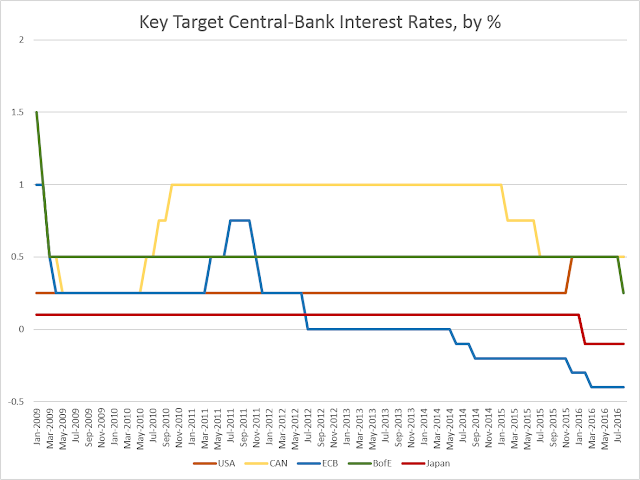 According to data released by the Colorado Division of Housing, the average rent in Colorado Springs continues to grow at a historically high rates: 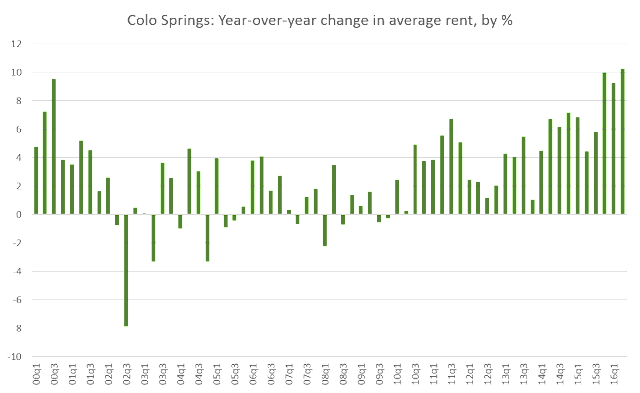 The last time the average rent grew at a similar rate was during the dot-com boom at the very end of the 1990s. If we look at the average rent over, time, we find that the general trend has, not surprisingly been upward, but has increased more rapidly over the past five years than was the case during the previous decade: 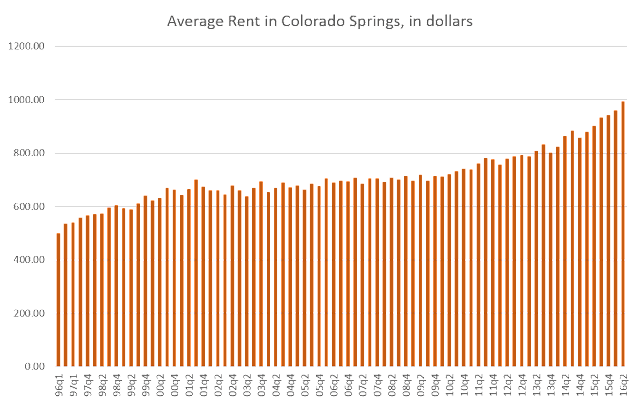 Looking just at nominal rent levels, however, can be misleading, and if we adjust for inflation using the nationwide CPI, we find that rents actually went down in real terms from 2003 to 2009. While there was some growth from 2009 to 2013, we see that even in inflation-adjusted terms that rent growth has picked up since 2014. Real rents only surpassed the 2001 high in 2014 following a long period of flat rents. Now, however, inflation-adjusted rents have surpassed the old 2001 peak, and have set several new all-time highs in recent quarters: 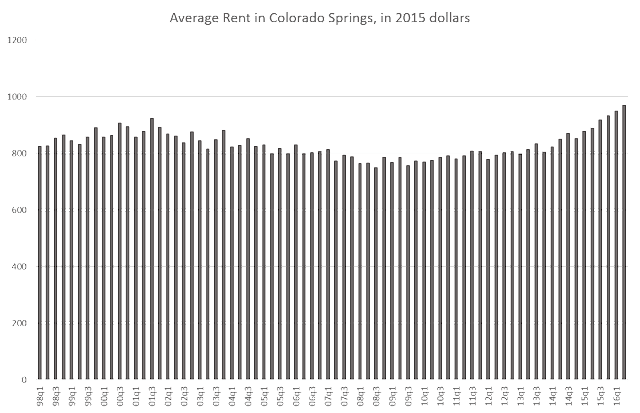 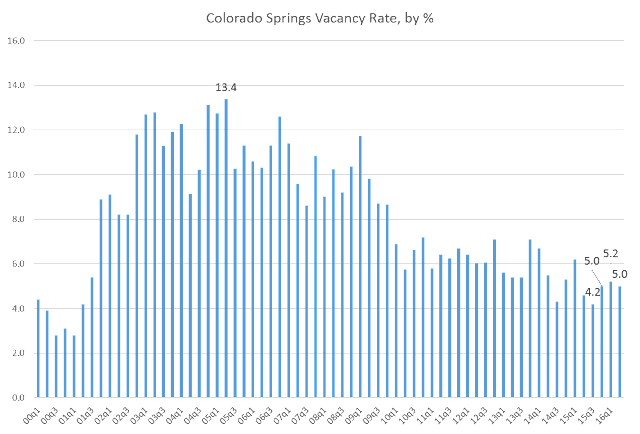 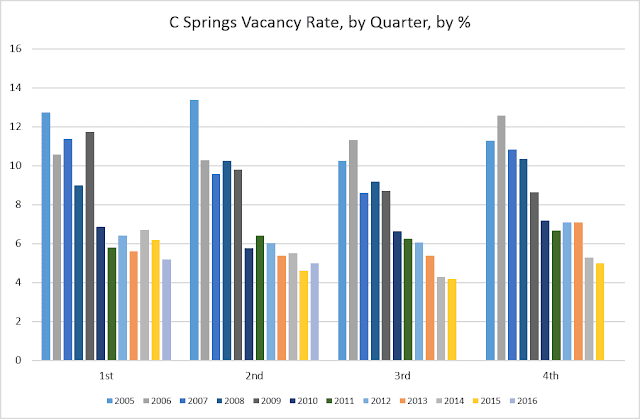 With some of the highest foreclosure rates among metro counties in Colorado, and with a fairly sedate job market compared to Denver and northern Colorado, Colorado Springs has been more slow to experience strong price growth in housing. However, over the past two years, it has become clear that Colorado Springs is now seeing unusually high growth in rents and housing demand. Future rents will depend partially on new housing construction, and we'll look at that in a future post.
Posted by Ryan McMaken at 10:07 AM