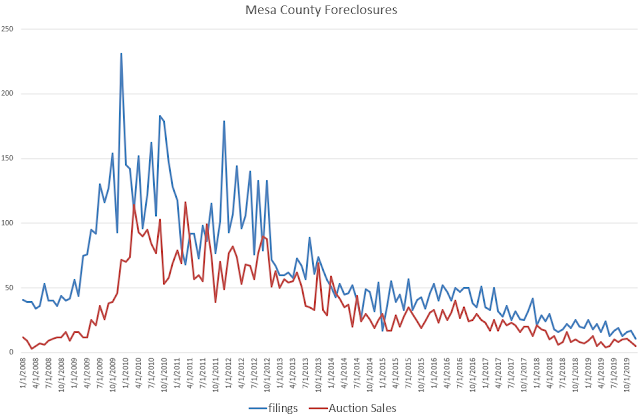 Releases of deeds of trust surge in Mesa County

Combining the state's big metro counties (plus Broomfield County) we saw that releases headed down in late 2018 as the Federal Reserve began to allow the fed funds rate to rise. The mortgage rate then followed suit, and releases trended downward. During 2019, however, the Fed began to push rates down again, and releases rose again at the same time: 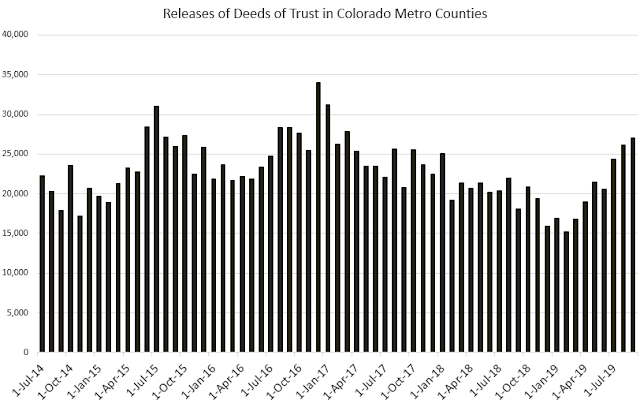 So far, I only have the data for the combined metros through October.

An odd thing happened in Mesa County during December, though. According to the Mesa County public trustee's latest data, releases spiked to the highest level I've seen since I began keeping track of releases back in 2008.

Releases have generally been hovering between 600 and 800 per month in the county over the past two years. But in December, the total shot up to 1,253. That's a huge increase. For instance, in December 2018, the total number of releases was 569: 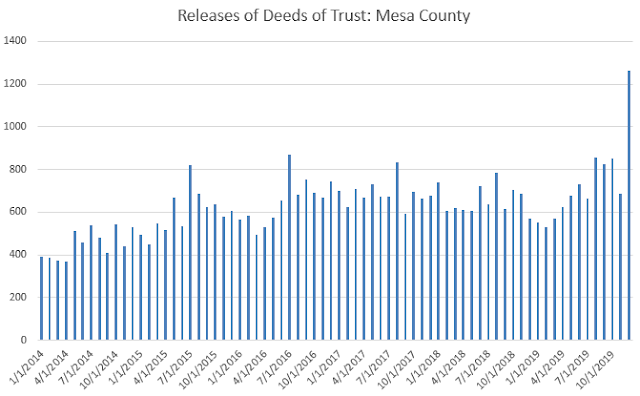 Based on what I have so far for the other metro counties, many counties are experiencing sizable increases — but this increases appears to be significantly larger than the other counties.  I spoke with the Mesa County PT and confirmed this is correct data, and it is not due to an administrative backlog or an artifact of processing. It does appear to be a result of real events in the local economy. It appears many homeowners in Grand Junction had the opportunity to refinance in December, and many took it.

We'll know more at the end of January if this is a trend, or if just a quick spike that will soon return to normal. But in either case, the surge in releases suggest confidence in the local housing market on the part of lenders and investors in the secondary market. It may also suggest lenders anticipate the Fed will continue to take a dovish view on inflation and interest rates.
Posted by Ryan McMaken at 2:01 PM