In March, 'release of deeds of trust' down 23 percent

Since early 2017, the general trend in release activity has been downward. In March 2018, releases totaled 21,304. That's up 11 percent from February 2018, when releases totaled 19,095. Overall, however, monthly data shows that monthly release totals have fallen repeatedly since December 2016's peak of 33,943: 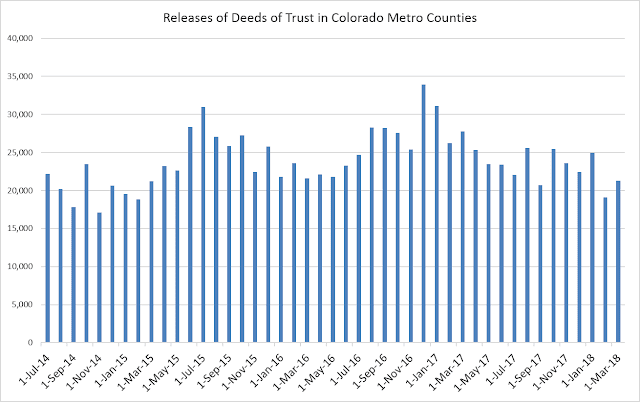 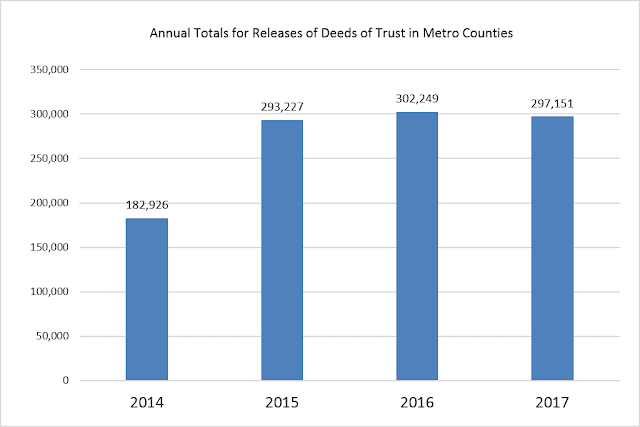 The trend in year-over-year changes has also shown a decline. Over the past nine months, releases have been down every month, when compared to the same month a year earlier. In March 2018, releases were down 23 percent, compared to March of 2017 — when releases totaled 27,798. 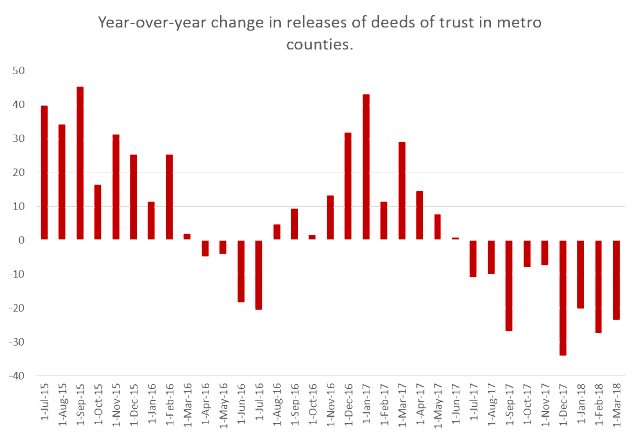 Another factor at work may be rising interest rates. Since re-finance activity is a factor in releases, and since re-fi's often slow as rates increase, we may be seeing slowing release activity as a result of significant increases in  mortgage rates over the past year. Mortgage rates are now the highest they've been since 2013: 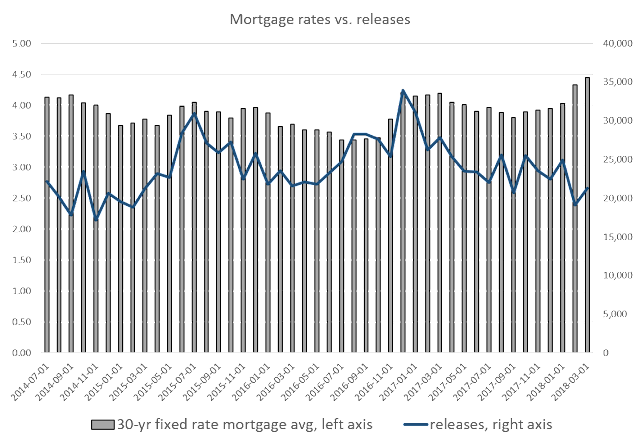 For more on historical release activity in Colorado, see here. 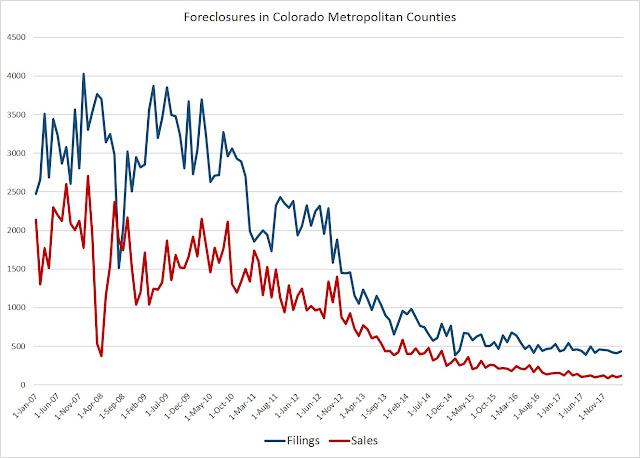 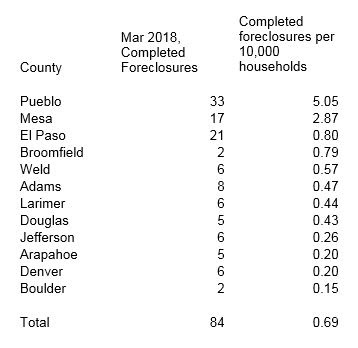 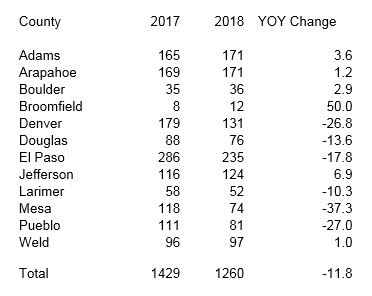 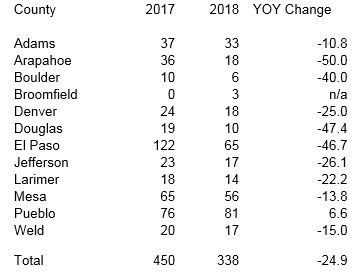 (Adapted from an article published at Mises.org.)
During the housing bubble that ended in 2007-8, the amount of new housing construction was remarkable. Enormous subdivisions were being constructed in metro areas across the land. Buildings of condominiums sprang up in city centers, and the ready availability of credit meant many were buying more than one house as "investments" or summer homes. New housing, it seemed, was everywhere.
At the same time, home prices were increasing, driven up in part by fact that everyone was convinced that housing prices always go up, and real estate — any real estate — was a rock solid investment.
When the bubble popped, there was suddenly a housing glut. From Las Vegas to Florida, we heard about buildings of condos that were more than half empty, and about suburban housing developments that became ghost towns.
On the most superficial level, the current boom might remind some of the pre-2008 bubble. Housing prices are climbing fast, and in many areas, there are bidding wars for houses that are quite ordinary.
This time, though, things are different. This time, there isn't nearly as much housing being built was during the last bubble. There may be a bubble in prices this time, but there does not appear to be a bubble in construction.
A look at housing starts in recent years shows that in raw numbers, starts are still not even close to getting back to where they were during the last boom: 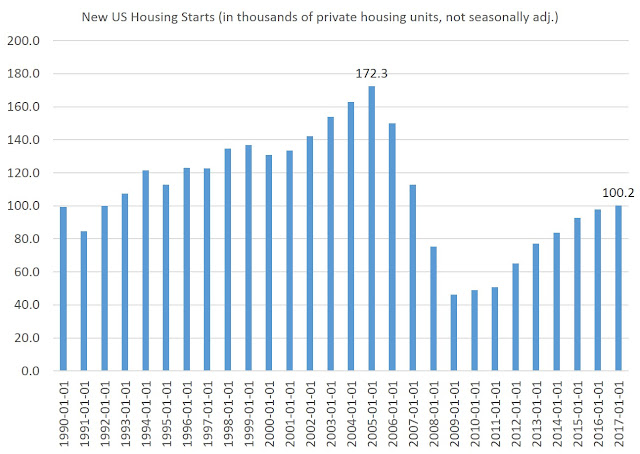 Now, some might think "it's good we not going back to bubble levels." True enough. But when we take into account growth in new households, we see that current construction trends are even weaker than the graph above suggests, and are below even more commonly-seen non-bubble levels of construction.
As both the Wall Street Journal and USA Today noticed last month, the amount of new housing construction taking place right now, as a proportion of existing households, is at historic lows. USA Today reports:

Since the real estate market crash took the wind out of the construction boom of the 2000s, fewer homes are being built per U.S. household than at nearly any time in history.

And the Wall Street Journal concludes:

Home construction per household a decade after the bust remains near the lowest level in 60 years of record-keeping...What makes the slump puzzling is that by most other measures, the American economy is booming. Jobs are plentiful, wages are on the rise and the stock market is near record highs. Millennials, the largest generation since the baby boomers, are aging into home ownership.

When we look at new housing construction compared to total households going back to 1959, we find that 2009 and 2010 were years with the smallest amount of new construction in decades: 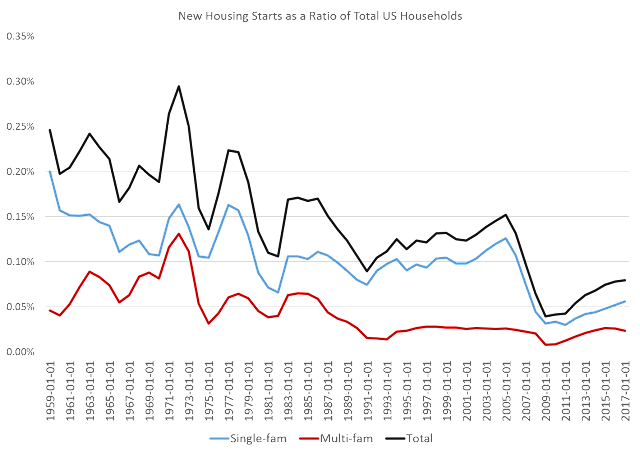 Only the early 90s are comparable to what happened in the wake of the 2008 financial crisis.
Moreover, since 2010, new construction has rebounded remarkably little.
Last year, the Kansas City Fed produced a similar analysis, and the results were pretty much the same: new housing construction, taking household growth into account, now remains near a multi-decade low.
But why has this happened? The Fed Report considers a number of options, including:

One reason is that builders in many metropolitan areas are facing a shortage of qualified construction workers. In addition, smaller builders, which account for the majority of single-family development in some mid-sized metropolitan areas, are having trouble financing land purchases and construction....A third explanation is the limited availability of undeveloped land in desired locations.

Some of these factors were due to accidents of history. Many of the Mexican immigrants who worked in construction in the US in the decade following the 1994 Mexican financial crisis now are less interested in working in the US thanks to improvements in the Mexican economy. Since 2009, net migration from Mexico has fallen below zero. Some of those leaving took their homebuilding skills with them.
Meanwhile, finding inexpensive financing for land acquisition and construction has been difficult as money has been siphoned off to other forms of bubble investment as central-bank produced asset inflation continues.
While real estate is certainly affected by expansive monetary policy, bubbles inflate in unpredictable ways. During the last bubble, investors grew enamored with housing, and money flowed accordingly. But nowadays, as Brendan Brown has often noted, other investment "narratives" have directed many investors' attention elsewhere. It's no longer assumed that housing prices will always go up. Meanwhile, lumber costs, labor costs, and regulatory costs at the local level continue to push up production costs. Since the advent of Dodd-Frank, small banks have been more often squeezed out by a handful of huge banks. As small banks disappear, so does access to financing for many smaller builders in smaller markets.
Taking all of these things together, the supply of housing is not recovering to more historically normal levels.
This doesn't mean demand for housing has gone away, of course. Population growth has not contracted like housing construction has. Vacancy rates are down and housing prices in both rental housing and in single-family housing continues to head upward.
And this lackluster production is all happening during a period of expansion. Presumably, it should be easy to find financing to build housing right now, and to find buyers who can pay a price that will cover expenses for homebuilders. That doesn't seem to be happening.
Posted by Ryan McMaken at 11:07 AM 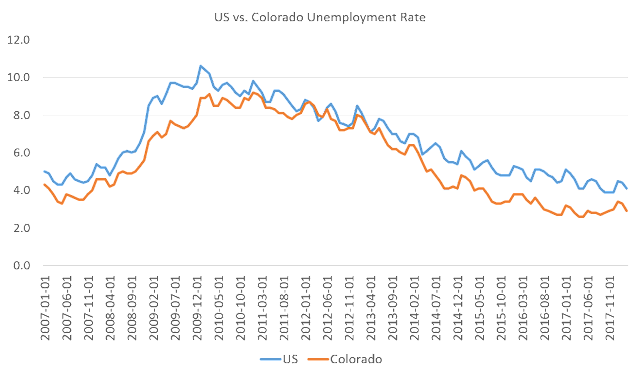 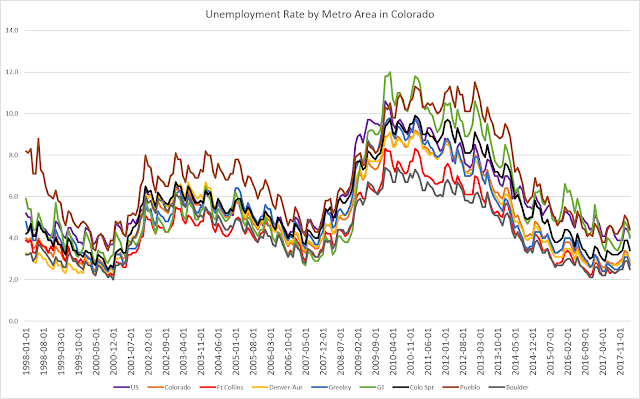 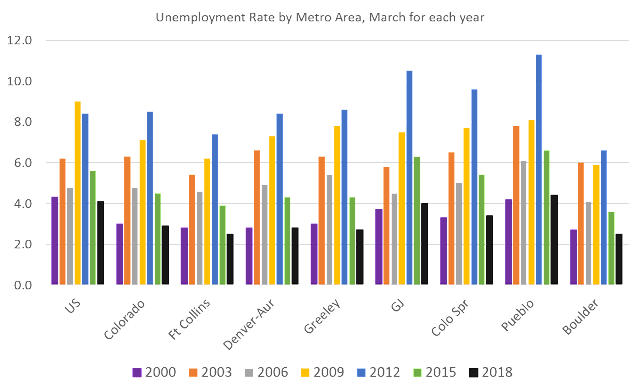