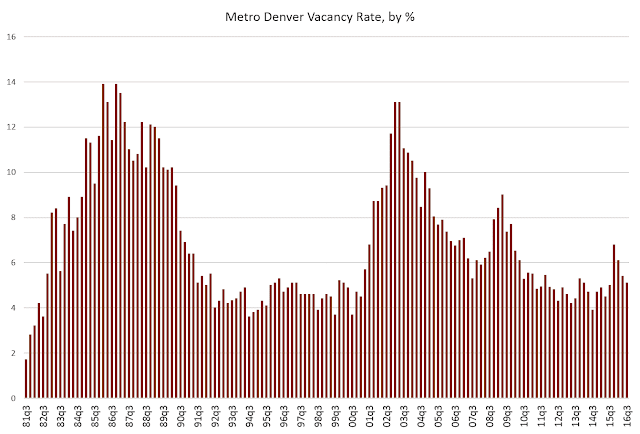 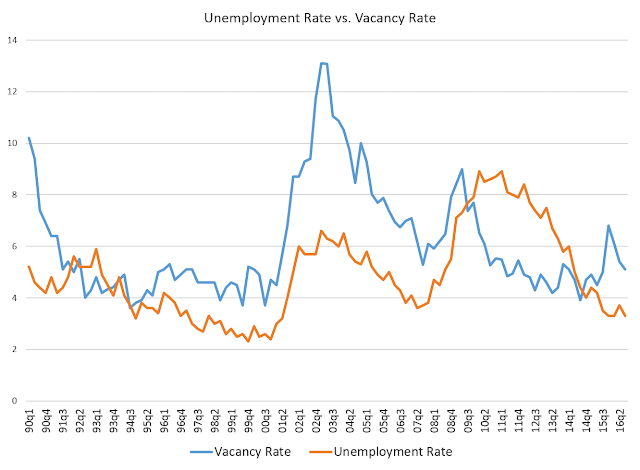 In the first graph, we see that rent growth had reached all-time highs last year, but things have since tapered off (the graph shows percentages): 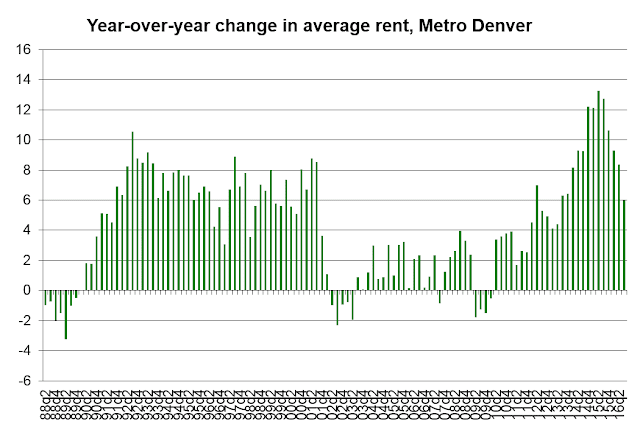 At 5.9 percent, the growth rate for this year's third quarter is at a level that would have been considered very run-of-the-mill throughout the 1990s. Considering that new housing permits reached a 15-year high in metro Denver during October 2016, it may be that the period of surging rents in metro Denver is over for now.

In the second graph, we see rent growth in non-inflation adjusted dollars over the past 35 years (the graph shows dollars): 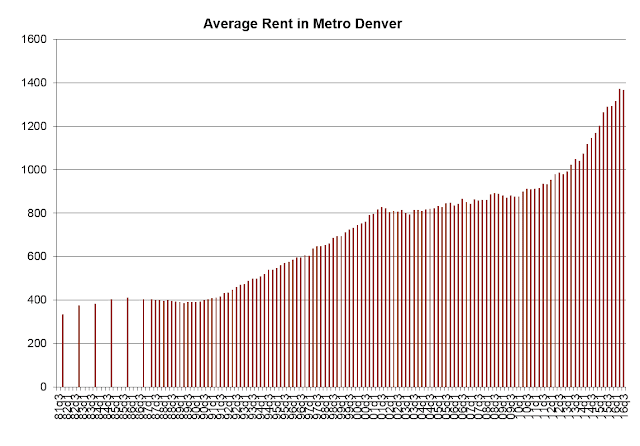 Although rent increases have been getting smaller, they do remain in positive territory, so we do see that the overall trend has certainly been upward.

It is always a good idea to look at rental rates with an eye on the inflation-rate as well. In recent years, rent growth has generally outpaced the Consumer Price Index (CPI), and we see that is still the case as of the third quarter. (The CPI was up only 1.1 percent, year-over-year for the third quarter). However, we can see that rent growth, when we take inflation into account is less than it is in nominal terms. Adjusted for inflation, the average rent in metro Denver looks like this: 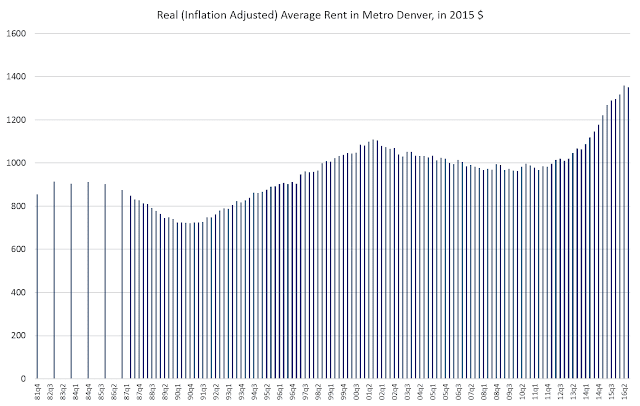 As the CPI has been growing very slowly in recent years, we find little difference in the recent trend between the nominal numbers and the inflation-adjusted numbers. What's different in this case is the fact that rents can go down for years at a time  in real terms — as happened from 2001 to 2012. That has not the been the case since 2012, however, and even when adjusted for inflation, we find that rent growth has been substantial in recent years. However, as is the case with the nominal rents, the rate of year-over-year growth in rents has been falling for the past five quarters.

The takeaway here is that rent growth continues to be positive, but the trend suggests we're already moving beyond last year's record-level rent growth and may very well be moving into a period of more moderate rent growth, especially in light of increased activity in single-family and multi-family construction.
Posted by Ryan McMaken at 9:12 PM

Home Loan Payoffs Down 2.6 Percent in Third Quarter of 2016

The number of mortgage loans paid off in Colorado was down 2.6 percent during 2016’s third quarter compared to the same period of last year. Mortgage payoff rose 21.6 percent from the second quarter to the third quarter of this year.

Public trustees in Colorado released a total of 87,192 deeds of trust during the third quarter of 2016, indicating a sizable increase in the amount of home purchase and refinance activity since the first and second quarters of this year. Typically, a release of a deed of trust occurs when a real estate loan is paid off whether through refinance, sale of property or because the owner has made the final payment on the loan. Release activity rises as refinance and home-sale activity increases. 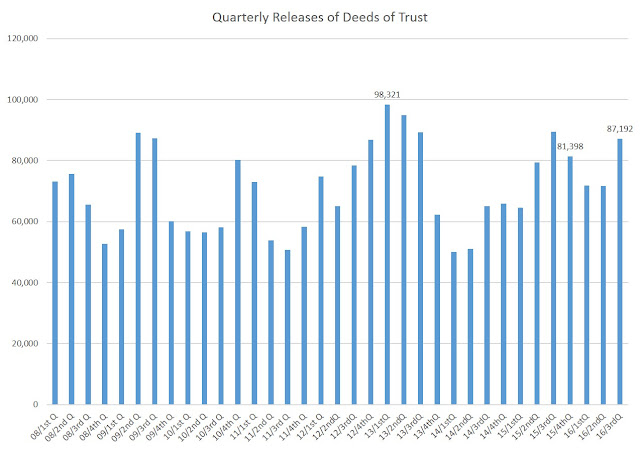 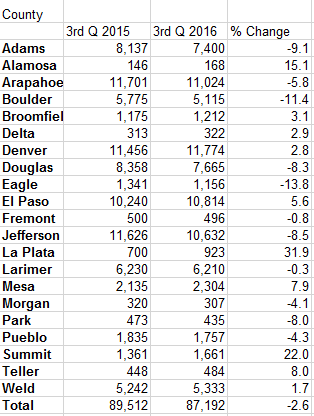 In this case, we see that Summit County and La Plata County reported the most release activity over the period, thus suggesting more sale and refi activity in those areas. The largest decreases, on the other hand, were found in Boulder County and Eagle county over the period suggesting less sales and refi activity. Overall, release activity fell in 11 counties while increasing  in 10 counties.

In this case, there were only 7 households per release of deed of trust in Summit County, making it the most active county. The least active county was Pueblo County: 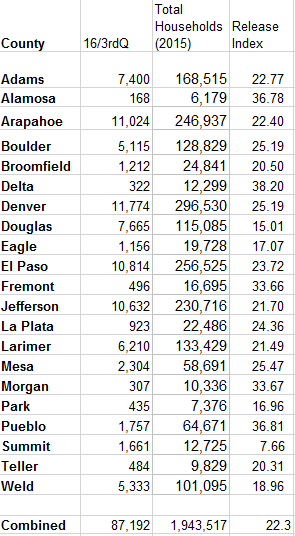 The third chart shows total releases for the first three quarters of this year compared to the same period last year. In this case, the largest increase was found in Alamosa County, and the largest decline was found in Eagle County. In the counties surveyed, activity fell 1.3 percent from 2015 to 2016. 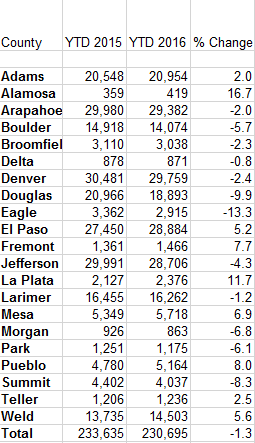 In this case, it appears some of the most expensive counties — in terms of real estate — have been experiencing some of the largest declines in activity while the largest increases are seen in the lower-cost counties such as Pueblo and Mesa. There are exceptions, however, as in the case of La Plata county, which is a relatively expensive county that is nonetheless seeing continued increases in release activity. 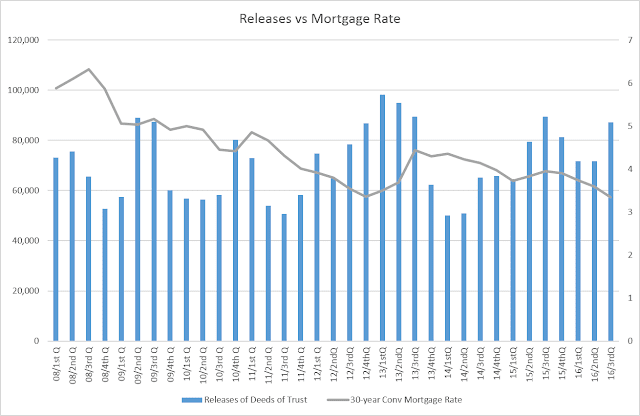 Other factors are important too, however, and these include overall demand for housing, employment, and population growth. In Colorado, even in the face of increases in the mortgage rate, we often continue to see sustained real-estate transaction activity when jobs creation remains solid and population totals are steady or increasing. Overall, 2016 has seen little change from 2015 in terms of statewide release activity.

Barring a significant chance in economic conditions, this situation is likely to continue.

(Totals for releases of deeds of trust are collected quarterly. This report tracks releases of deeds of trust as reported by public trustees in Colorado. The report includes twenty-one counties which are chosen based on population size and to ensure that as many regions of the state as possible are represented. More than 90 percent of all occupied households in Colorado are within the twenty-one counties chosen.)