It is apparently unspeakably difficult to produce a screenshot of video of myself in which I look decent. However, this was a pretty good story.

While I prefer to put the division director in front of the camera, sometimes I have to be the spokesman: 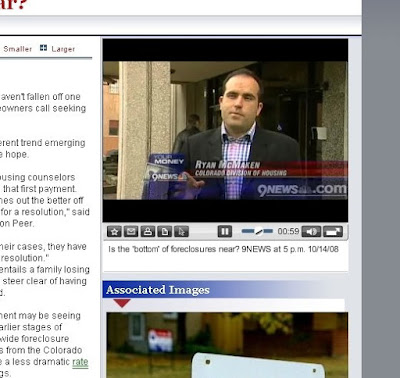 McMaken says a recent report from the Pew Charitable Trust that forecasted one out every 25 homeowners in Colorado would likely go into default in the next two years wasn't necessarily offering any new information. McMaken pointed out that such a statistic doesn't necessarily indicate that there will be a correlating increase in foreclosure.

"One in 25 does seem very high, but you want to keep in mind that this is only dealing with defaults, so we're talking about those homeowners that have become 90 days overdue in their payments. It doesn't necessarily mean that default will end up in foreclosure," said McMaken.

Many have been wondering if the crisis on Wall Street has "bottomed out." The same could be asked of the housing/foreclosure crisis. Much like the nebulous stock market, the answer for the housing sector is fluid.

"That's very difficult to say, certainly for 2008 I don't think it's the case that we've bottomed out," said McMaken.