The Fed announced today that, as expected, it will not change the target Federal Funds Rate. This follow's last month's rate change when the Fed increased its target rate from 0-0.25 up to 0.25-0.50, which was the first increase in seven years.

Today's lack of action thus leaves the target rate near what are historic lows: 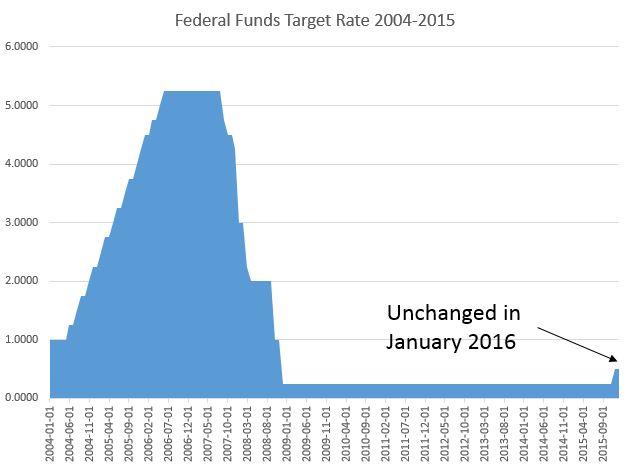 Given that the markets expected no change, there was little reason to expect any big movements in the markets, but according to observers in the financial media, the Fed's statement is being interpreted as pessimistic, which drove down markets further.

We've known for years that the Fed has been ill-at-ease with the overall state of the economy, of course. If the Fed had thought the economy was doing well, it would have raised rates long ago. December's rate hike came in many ways as an attempt to send the message that, yes, the economy is strong enough to warrant a rate hike.

But the Fed knows that even with a 0.25 percent hike, it's pressing its luck given the extensive reliance of the current global economy on easy money.

Indeed, even when markets began to suspect that the Fed might raise rates, the Dow Jones headed down. As early as August, when it seemed that the Fed might raise rates at its September meeting, the DJIA began to fall. The Fed chickened out in September, but eventually followed through in December. The market subsequently had one of its worst New-Year openings in decades: 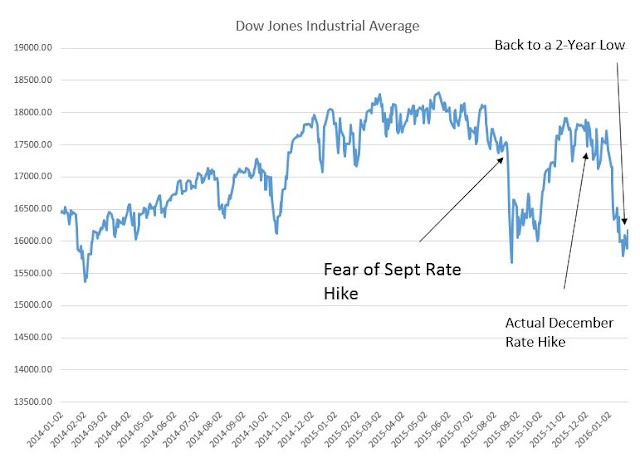