Last week, the Bank of Canada announced it would stay at 0.5 percent for its target overnight rate (the equivalent of the Federal Funds Rate in the US).

Many had believed that the BOC was leaning toward another rate cut, but those seeking an additional cut to stimulate Canada's troubled economy were disappointed. The dropping oil price has heavily impacted Canada's economy, just as it has been taking its toll on oil-industry-heavy Western states in the US.

The overnight rate was cut twice in 2015. From 1.0 to 0.75 in January 2015 and again to 0.5 in July. While the recent hold-steady policy provides a respite from 2015's cuts, the overnight rate has been at very low levels since 2009. the BOC has been relatively hawkish compared to the Fed, although not by much: 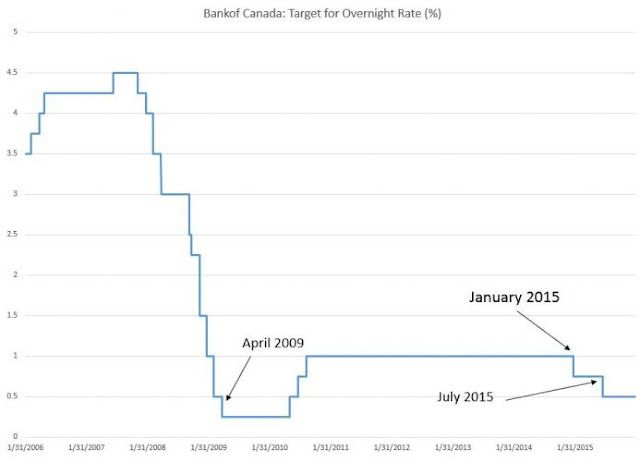 Fortunately for Canadians, and for Americans who are adept at investing in Canada, Canada's economy has been relatively stable in recent years. Canada avoided the a collapse in housing markets, and in the wake of the 2008 financial crisis, Canada was said to have "gotten things right."

Indeed, Canada's central bank had pursued easy money less aggressively than the US in the early years of what would become the US housing bubble, possibly lessening the effects of malinvestment into the housing sector.

And the BOC has generally been more stable in terms of its overnight rate: 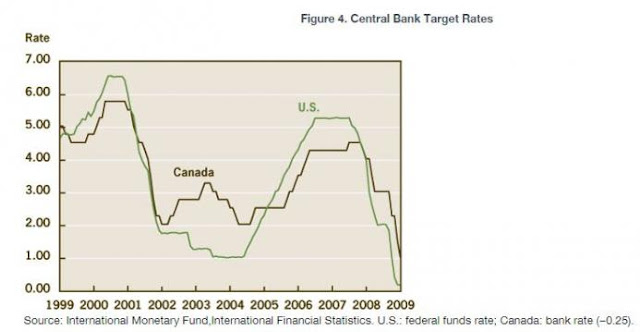 Nowadays, however, there are genuine concerns about the Canadian economy "headed off a cliff." Given that the US exported more than 260 billion dollars worth of goods to Canada last year, that's not great news for the USA, either.
Posted by Ryan McMaken at 9:51 PM