The Bureau of Labor Statistics released new employment data today, and nonfarm payroll employment increased in May be the smallest amount seen in 28 months. 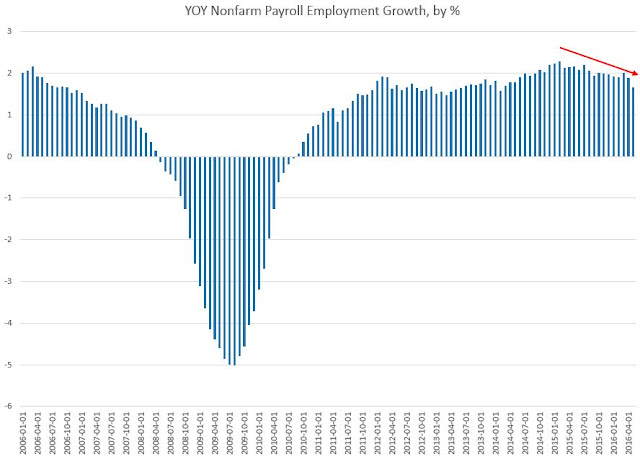 Since July 2015, the general trend in growth has been down, and at 1.6 percent remains well below where growth was during most of the 1990s.

As I don't like to use the seasonally adjusted numbers — which add an additional layer of needless manipulation — I also like to compare job growth from the same time of year across several years.
When we do this, we find that the job growth from April to May during 2016 was the lowest April-May growth total since 2009: 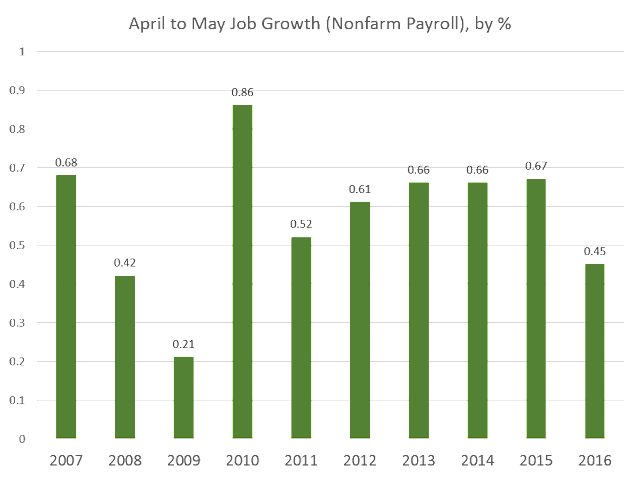 From April to May 2016, there were 651,000 new jobs added, which is a significant drop from the same period of last year when 947,000 jobs were added. Over the past decade, 2016 in this measure beats only 2008 and 2009, both of which were years of economic decline. (These numbers are not comparable to the seasonally adjusted numbers.)

In other words, May 2016 was the weakest May for job growth in 8 years.
The reaction in the press to the latest jobs numbers has been one in which most everyone has been forced to acknowledge that the jobs report is a disappointment. However, spokesmen for the federal government have been hard at work spinning the numbers. Secretary of Labor Tom Perez, for example, attempted to blame everything on the Verizon strike. That's a nice try, but the strike doesn't explain the obvious decline in the year-over-year numbers.  The strike might explain why the May numbers dropped off as much as they did, but it can't explain the trend. Also, it's a bit of a stretch to blame all, or even most, of the big drop from April-May 2015 to April-May 2016 on the Verizon strike.

Perez tried some other, even less convincing, claims as well, saying that the US's insufficient mandates on paid family leave means that fewer women are entering the work force, and thus pushing down jobs totals. Again, how on earth does that explain why May's numbers are especially bad. The laws on family leave haven't changed much on recent years, so why is it now suddenly important? The answer is it's not — except as something to deflect blame on bad economic data.
In any case, the overall trend should not be a big surprise. The current recovery has always been week, and has been heavily dependent on an activist central bank and low interest rates. In recent quarters, the Fed has finally been backed into a corner and has become hawkish. Realizing that more rate cuts are unlikely to come any time soon, the economy is not receiving the usual Fed-manufactured stimulus that investors and employers have become accustomed to. With the Fed talking about the need to raise rates, who can be surprised that the "recovery" is withering?
Posted by Ryan McMaken at 4:26 PM