The Santa Fe New Mexican recently posted an informative article on the New Mexico economy, which has never really gotten back to where it was before the Great Recession of 2008-2009 — at least not in terms of employment.


When it comes to New Mexico’s economy, 2006 seems like a lifetime ago.
Job growth that year was its fastest in more than a decade. The unemployment rate dropped to 3.6 percent. The price of oil was at record levels. State government was awash with cash. 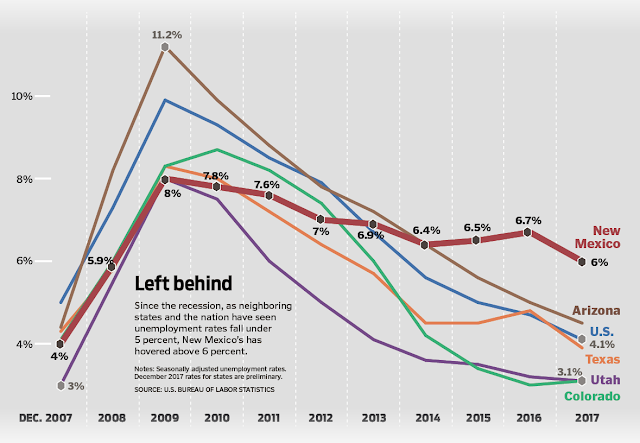 Then, with stunning speed, came the Great Recession in December 2007, and New Mexico still hasn’t recovered.  In a state where the economy is based in large part on government dollars, it’s government numbers that paint the picture.  The state’s jobless rate was 6 percent in December 2017, according to preliminary estimates. Alaska is the only state doing worse.

The nation’s rate was 4.1 percent, a 17-year low.  Of New Mexico’s 33 counties, all but tiny Mora County have higher unemployment rates than they did before the recession.  The state hasn’t yet gotten back the more than 50,000 jobs it lost during the recession, making New Mexico one of only a few states that have yet to recover their jobs.


Read the full article.
Posted by Ryan McMaken at 3:30 PM