Nevertheless, we can get a sense of how Colorado compares to the nation right now by having a look at the two rates. So here they are, and I've thrown in the past twenty years: 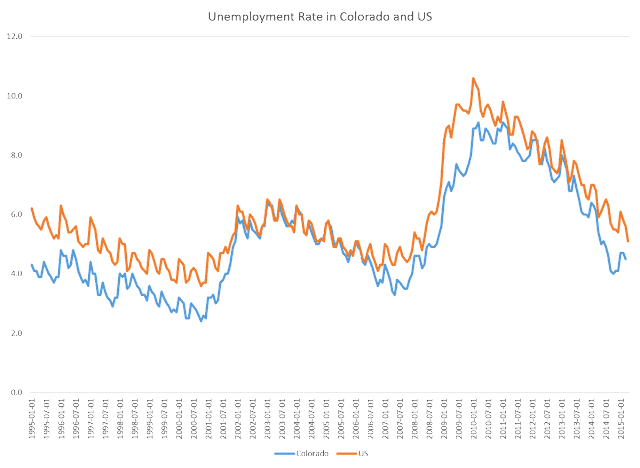 As if often the case, we see that Colorado's unemployment rate is below that of the nation, and in 2014, the Colorado rate dipped well below the US rate. This may have reflected the acceleration of the oil economy before it finally softened , and we began to see the Colorado rate inch back up. Certainly, the energy-related industries (most active in only a handful of states) have been out-performing the overall economy, and northern Colorado's oil jobs certainly are a part of that. Indeed, it was in August that the oil price really started to slip, which over time led to fewer hires in the industry and less production. And sure enough, the unemployment rate began to tick back up in December 2014.

Here's a graph of the WTI oil price: 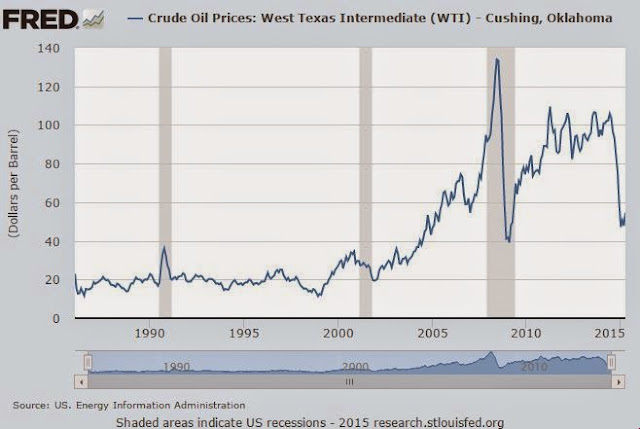 We can also guess that a lower unemployment rate might also be impacting the larger economy. For example, the fact that metro Denver outpaced all other cities measured in the most recent Case-Shiller home price report may be partially explained by the fact that employment is relatively robust in Colorado. It also helps keep in-migration steady.
Posted by Ryan McMaken at 12:07 AM