Many people are familiar with this graph from Calculated Risk: 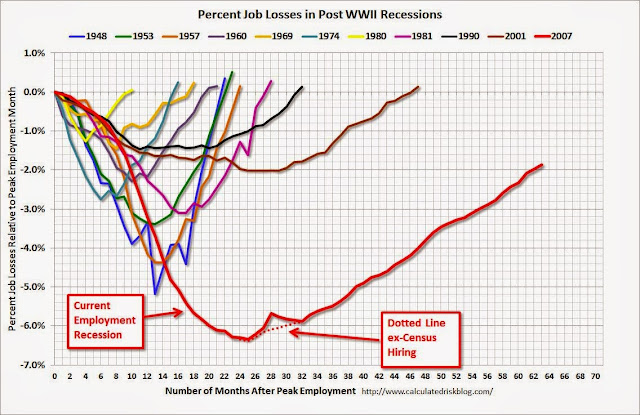 Basically, it shows the number of months it took the job market to return to its previous peak.

I couldn't find a similar one for Colorado, so I created a couple myself. See below.

The first graph uses the Household Survey which measures employment by asking a sample of people if they want to be employed and if they are employed. So, this is a measure of the number of employed persons. I've simply indexed total employed persons as measured from peak to peak. Also, we only have data going back to 1976, so there are fewer recessions to measure here: 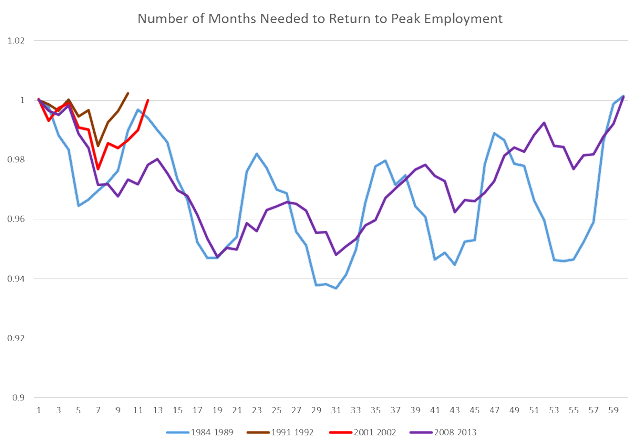 We can see that by this measure, the 1991 and 2001 recessions were over quickly, in terms of jobs. In fact, one could argue that the 1991 job losses were cyclical and show no recession at all.

On the other hand, the 1984 to 1988 job losses were very bad, and we find there a full 60 months needed for recovery. That's five years of lost jobs. Everyone who knows Colorado economics history knows the second half of the 80s were not good economically, so this probably won't come as a big surprise. Foreclosures were rampant, and the state actually had zero net population growth in 1990, as a result.

Interestingly, job losses that followed the 2008 financial crises were similar, and also took 60 months to recover. But, given that some of the troughs reached during the 1980s bust were deeper than the most jobs recession, one could argue that the 1980s were worse.

There are two measures of unemployment, however. The Establishment Survey shows different results since it measures the number of payroll jobs at larger employers, and not the number of persons employed. 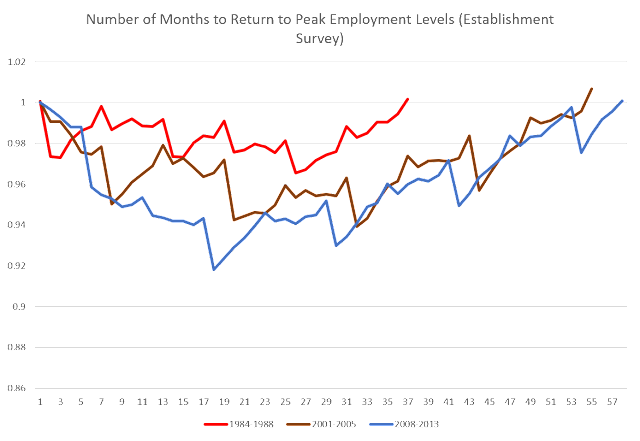 Why such a big difference in the 2001 recession? The data here tells us that the number of people employed returned quickly to peak levels and payroll employment struggled. This suggests that people during that period were employed somewhere, but not at major employers, and they were likely taking pay cuts and working fewer hours (i.e., they became part-time workers). But they were employed.

In both cases, however, the jobs situation after 2008 was pretty grim, with both payroll employment and persons employed taking at least 58 months to recover.

To answer the question in the title of this article, we could look at many other things, such as the total number of persons who were unemployed, versus the depth of wage cuts, and the other variables. Naturally, the definition of "worse" could vary as well.

But, speaking casually, we might be able to say seriously that the jobs situation of the 1980s was not worse than the post 2008 situation. If felt worse according to many people, and this may be due to a variety of factors including the fact that the rest of the country was doing well during the period of 1984-1988, so Colorado lost a lot of its population to other states where jobs could be more easily had. After 2008, Colorado looked no worse than most other states, so population even continued to grow during the period, making the state seem less beleaguered.
Posted by Ryan McMaken at 10:36 AM