Is Living-at-Home an Indicator of the Standard of Living?

In this article, I noted that median incomes — even when adjusted for cost of living, taxes, and social benfits — are higher in the United States than in Europe. What's more, Americans at poverty level (i.e., 60% of national median income) have more purchasing power than median-level households in many European countries.

But what are some outward indications of this? The UNICEF report on childhood poverty, for example, attempts to quantify the effects of poverty by asking extremely subjective questions like "Did you feel stress this week?" and using the answer to compile a type of index. The problems with indicators such as these should be obvious, since "stress" can mean any number of things.

But let's try for a somewhat more concrete manifestation of a low standard of living: adults living with parents.

In the US, at least, it's been long accepted that new household formation is an indicator of the state of the economy. Specifically, it is assumed that young people who can find gainful employment will be able to move out of their parents' homes more quickly, and also potentially find spouses and/or have children sooner. Economic factors are generally blamed on trends in living at home, as with the discussion about the "boomerang effect" during the most recent business cycle.

This has been the case historically in the US as the marrying age of Americans has fluctuated over time and geography with the availability of land, which was a key factor in economic self-sufficiency in an agrarian setting.

It appears to have been an important factor in Europe as well, since in pre-industrial times, there was little land available for purchase or settlement — and even less in the way of manufacturing jobs — and adult children often had to wait to simply inherent the family lands rather than attempt to find a new household. 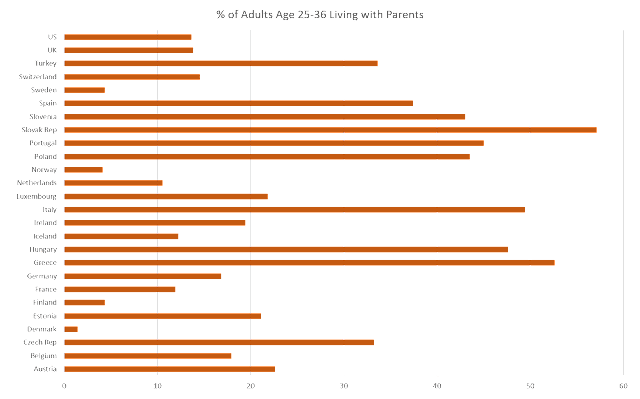 The US numbers are from the Census. (Men tend to live with their parents in much larger percentages than women, by the way.)

The percentages here swing quite a bit between 57 percent in Slovakia and Denmark at 1.4 percent.

It's reasonable to accept that cultural factors may be at play here.  Clearly, living at home with one's parents appears to be frowned upon more in Scandinavia than in other rich countries of similar median income levels.

Nevertheless, if we do plot the living-home numbers against median disposable income, we do see a pretty clear correlation: 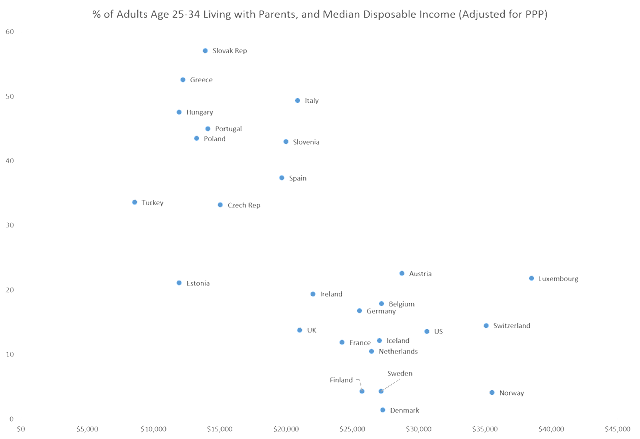 The countries where the median household has more purchasing power have fewer cases of adult children living with parents. Few should be surprised to find Greece and Portugal up in the top left of graph, for example. Almost all countries with median incomes above $20,000 have living-at-home percentages below 20 percent, while almost all countries with median income below $30,000 have living-at-home levels above 30 percent.

While it's not a perfect proxy for household purchasing power, the percentage of adults that continue to live at home in the prime family formation years does give us some insight into the real-world implications of the fact that real disposable income is lower in most European countries than it is in the United States.

A note on the data: This is all 2013 data, except for Turkey, which is 2007 (the most recent available.) The US data matches up with the Euro data on the age of the adults measured (i.e., 25-34), although in the case of the Euro data, it includes married or cohabiting adults children living with parents. These people are excluded in the US data. Fortunately for us, though, the percentage of people living at home who were also married or cohabiting is under 5 percent.
Posted by Ryan McMaken at 1:26 PM