A Better View of Poverty Rates: We Must Consider the Cost of Living

This week a number of wire services picked up a story in which states are ranked according to which states are the "most expensive states to raise a family." The list, which was created by a private company to drive web traffic to its site, attempts to quantify the cost of raising a family by factoring in government mandated family leave, the cost of child care, and other factors.

The use of mandatory family leave is rather novel, given that mandated leave raises the effective minimum wage for many workers, and thus negatively impacts the least-skilled workers the most.  Nevertheless, the list appealed to the common-sense notion that there's more to one's standard of living than a relatively high income. The cost of living is an important factor.

Given the importance of the cost of living, it is very problematic that the official poverty rate totals for US states do not take costs into account.

When measuring poverty rates internationally, poverty is just defined as households that make 50 percent or 60 percent of the national median income. Although these measures often attempt to take into account differences in the cost of living among different countries, measuring poverty this way provides its own set of problems. It simply makes poverty a purely relative measure, so we end up with a situation where purchasing power for a median household in one country (say, Portugal) is actually lower than a poverty-level household in another country (say, the US).

The US official measure, on the other hand, attempts to get around this problem by defining the poverty rate as an actual dollar amount based on what a household can buy. The federal government has set the poverty income at $24,250 for a family of four in 2015.

If we fail to adjust for the cost of living, the poverty rate  map looks like this: 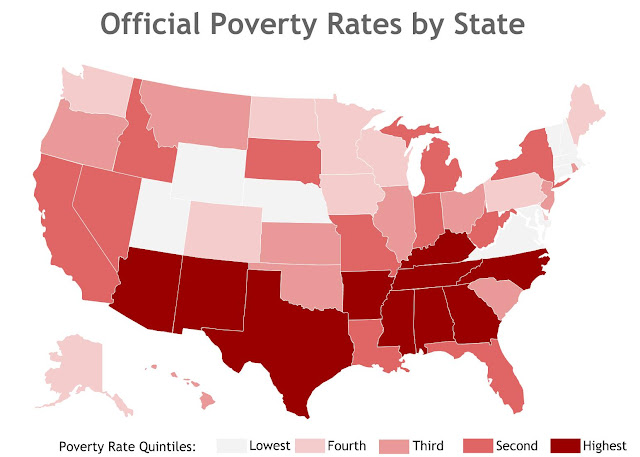 In this case, the highest poverty rate is found in Mississippi with a rate of 23 percent, with Arizona and New Mexico close behind at 21 percent and 19 percent, respectively. New York and California are a dozen states down the list with poverty rates 15 percent for both. (See here for full list based on 2009 calculations.)

Many have noticed certain regional trends here, and that has led to a myriad of articles claiming that so-called "red states" have higher poverty rates than the "blue states." In many cases, "red states" is really code for "low tax" or "free-market-ish" state. In other words, this map "proves" that low taxes and freer economies cause more poverty.

The feds have long recognized the discrepancy here, and in the fine print have long noted that poverty rates should only be used as very general "guidelines" or measures over time. Comparisons among states are discouraged.

That doesn't stop pundits from claiming that blue states like California and New York have been successful in combating poverty through tighter regulation of business, and higher taxation.

If we adjust the states and poverty rates for the cost of living, however, the map looks a bit different: 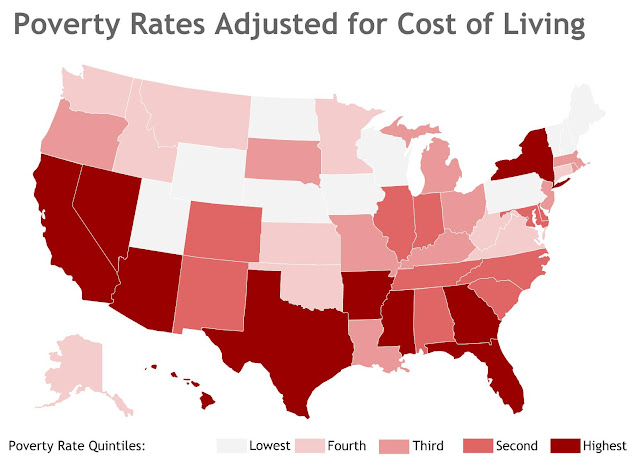 In this case, the state with the highest poverty rate is California at  23 percent. Arizona and Florida are close behind with rates of 22 percent and 20 percent, respectively. New York has risen to sixth place with a poverty rate of 18 percent, while Mississippi has fallen to eighth place with a rate of 17 percent.

Here we see our bias-confirming assumptions no longer seem to apply since  no correlation is apparent along the lines of the red-state/blue-state claims. Right-wing Indiana, at 15 percent, is more or less equal with left-wing Illinois, while Mississippi and New York, with widely divergent public policy regimes, also have similar poverty rates. (See Table 3.)

Obviously, we have to look somewhere beyond our neat-and-nice ideas about red states and blue states to come up with an explanation.

Of course, poverty can be a function of so many things, that it's impossible to generalize. Public policy is certainly a factor, but so are cultural factors, access to capital, the transportation infrastructure, and more. Some states are influenced by the presence of Indian Reservations (such as Arizona) where local economic policy is more influenced by federal law than state law.

But most of the discussion about "rich states" and "poor states" has long been skewed by the fact we tend to ignore cost of living.

As a final illustration, we can look at median incomes from each state. The median income figures put out by the census bureau do not account for regional "price parity."

Using just the basic median income numbers from the Current Population Survey, we get this: 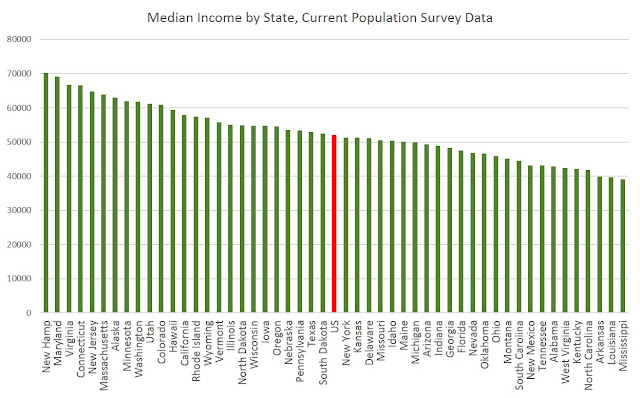 But once we adjust incomes for price parity, we find that many of the high-income, high-cost states fall quite a bit in the list: 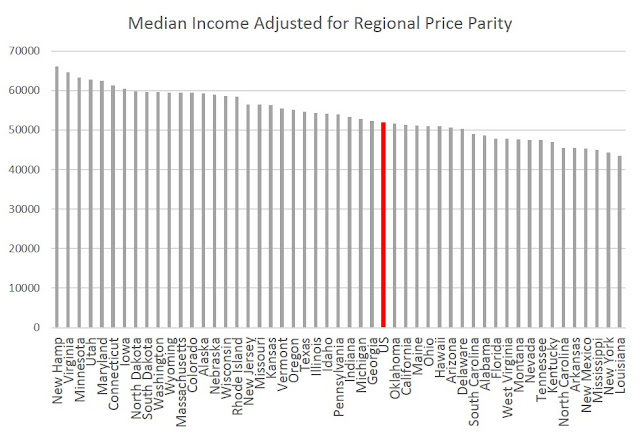 First, we notice that this compresses the variation in median incomes. The difference between the highest-income state (New Hampshire at $66,159) and the lowest income state (Louisiana at $43,462), shrinks to $22,697.

Basically, the purchasing power of a median household in New York or California is much lower than has been traditionally suggested.

This is also important to keep in mind when comparing US median incomes and poverty rates to foreign countries. Much of the US is very inexpensive in terms of cost of living and well below northern Europe, New Zealand, Australia, and even Canada.
Maps and graphs by Ryan McMaken.
Posted by Ryan McMaken at 8:09 PM