Republican Congressional leaders and President Obama recently agreed on a two-year budget deal. And in case you were worried, rest assured there were not any significant cuts to any government program.

Oh sure, there will be spending increases for some programs, and cuts for others, but the total amount spent is only going up with minimal changes to the big picture. Some of it will be covered by tax revenues, but about half of it will be covered, yet again, by an increase in debt. The Brookings Institution notes:


The second problem is that the lubricant Congress used to enact the deal was money it doesn't have. Thus, according to CRFB, all the spending in the deal cost $154 billion but the offsets in the bill amounted to only $78 billion. Thus, the true net cost of the bill, excluding budget gimmicks, was $76 billion. As always, the money will be obtained by additional borrowing, thereby increasing the nation's debt.

So, more than $150 billion will be spent, with 76 billion of that added to the national debt so future taxpayers and pay the principal and interest.

Moreover, much of this undoes the alleged "cuts" that were in the earlier sequestration. Remember when we were promised that government spending would be reduced over time thanks to the sequester? Pay no attention to that sort of thing. Nowadays, we have what's called "sequester relief" also known as "more spending."

All of this comes after several years of astronomically high government spending that came in the wake of the 2008 financial crisis, so to claim in any way that there have been anything resembling "cuts" in any context that extends beyond a single fiscal year strains the boundaries of credibility.

After having already driven through a massive expansion in Medicare for prescription drugs in 2003, George W. Bush kicked off an even bigger expansion in late 2008 with TARP and other enormous increases in fiscal "stimulus." Obama has been more than happy to keep us on that plateau: 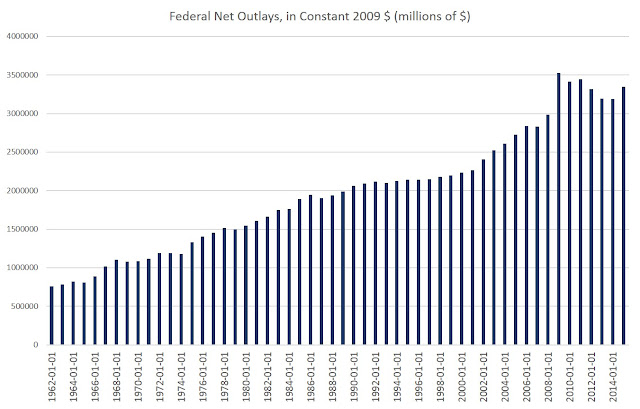 Now, you're likely to read a lot about how this program was slashed, or that program was "cut," in the latest budget deal, but there's certainly no danger of overall spending going down.

Thanks to the way things work in DC, every new budget deal involves a lot of logrolling where some politicians promise to support new spending, while other politicians agree to cuts. This is done in the context of promising support for some other political favor on some other part of the budget or on future legislation. Everyone understands that in the big scheme of things, there's no political will to cut much of anything.

After all, where would anyone make any actual budget cuts? Let's look at where most of the money is spent. Here's the 2015 breakdown: 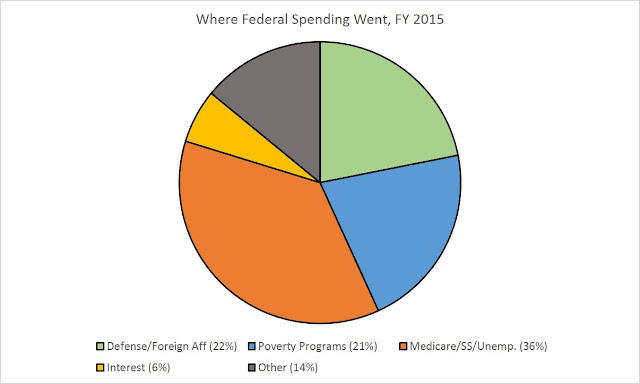 There Is No Public Support for Spending Cuts
It's hard to see where any of these cuts could come, politically speaking. When many people gripe about government spending, it is often a safe bet that they are really only complaining about spending that goes to programs they don't like.

For example, lopsided majorities of Americans oppose any cuts to benefits in Social Security or Medicare, which combined make the single biggest government expense.

In fact, in 2013, when Pew surveyed Americans as to which government programs should be cut, lopsided majorities opposed any cuts to Medicare or Social Security. When asked what programs should be cut as part of budget negotiations in DC, 87 percent of respondents opposed cuts to Social Security, while 82 percent opposed cuts to Medicare. (The popularity of these programs extends across Republicans, Democrats, and unaffiliated voters.)

If Social Security and Medicare are off limits according to 80 percent of the population, that puts 36 percent of the budget off limits right away. And unless the US plans to default on its debt, the government is locked into another six percent on top of that. (When interest rates start to go up, that six percent will get a lot bigger.)

So where to cut? Perhaps, we could cut defense? According to Pew, 73 percent of those polled are opposed to cutting defense. That puts another 23 percent off limits, so we're now up to 65 percent of the budget that few want to cut. Pew reports that 71 percent of Americans are opposed to cuts in "aid to needy" (i.e., Medicaid, TANF, etc). That leaves us with cuts to highway funds, scientific research, and other forms of discretionary spending. Those programs are all popular too.

Indeed, the least popular programs, those which more than a third of those polled would like to cut, are the State Department and Foreign Aid. Unfortunately for deficit hawks, those two programs combine for a paltry sum of 38 billion dollars. In other words, only one percent of the budget is ripe for cutting. Good luck getting the government budget under control.

Again, there are no significant cuts planned, but even if there were, they would come after years of substantial expansion. If we look at the three biggest areas of spending (defense, poverty programs, and entitlement spending) we'd see plenty of growth over the past decade (in constant 2009 dollars, millions of $): 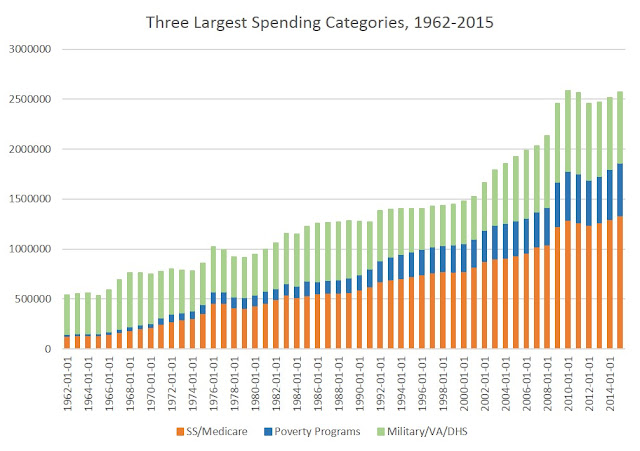 Many critics of growing government spending like to imagine that everything's being driven by spending on poor people, but it's not. In fact, spending on poverty programs barely outpaces spending on the old-age programs Medicare and Social Security.

Over the past yen years, Social Security and Medicare have grown 43 percent. Meanwhile, programs aimed at the poor, such as Medicaid, the earned income tax credit, food stamps, and others, grew 48 percent over the same time period.

Defense spending, which is also near historic highs, grew 11 percent over that time.

Poverty programs will see increases in coming years as Obamacare subsidies increase, but spending on Medicare is likely to accelerate as well. While Social Security may be topping out, retirees are likely to continue receive more back in Medicare benefits than they paid in. Indefinitely.

Of course, if Republicans manage to gain control of the White House and expand control of Congress, we'll likely see cuts to poverty programs. But those cuts will be matched by more military spending, and we'll see no overall decline in spending. Medicare will continue to expand.

Deficits Make It All Possible

Although it is abundantly clear that few want to see any cuts to government programs,  most can agree that they don't want any new taxes.

So, if the voters want more spending, but no tax increases, how will the new spending be possible?

Fortunately, we can just add it to the deficit! People used to worry about the deficit, but those days are gone. Now, we can just keep the Medicare and Obamacare cash flowing, and it's no problem, because we can just borrow: 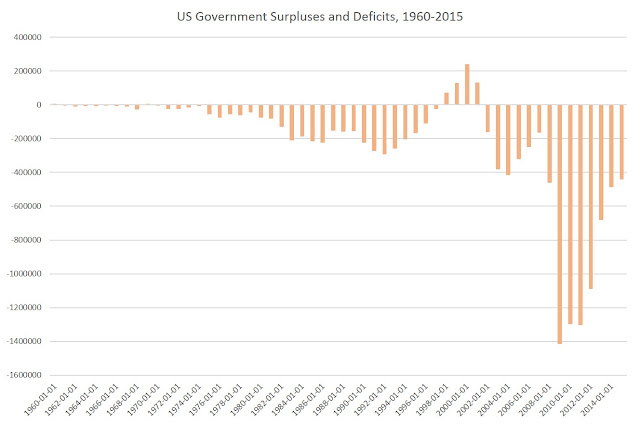 Thanks to the American love of charging current spending binges to future generations, the 2015 deficit was 438 billion — which is an improvement over the years of 2009-2012 when the deficit topped a trillion dollars each year — but deficits year after year have added up to a total government debt of 18 trillion dollars: 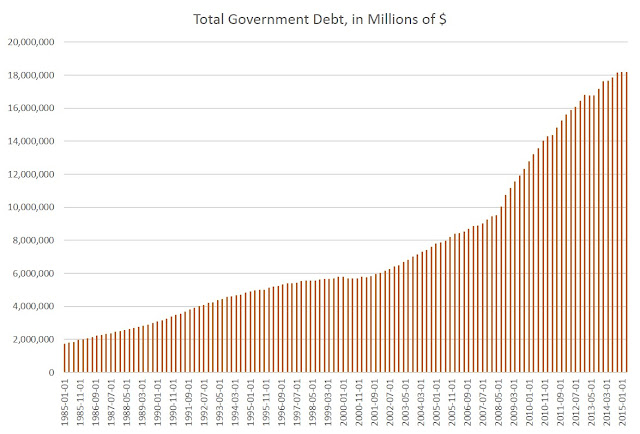 A little trimming of one program here or another program there is nothing more than window dressing.

So far, thanks to a continued demand for US debt globally, and thanks to partial monetization of the debt through the Fed, the feds (with the approval of the voters) can continue to pretend that the binge can go on forever.  As long as the central bank continues to successfully play the game in which interest rates for US government debt remain low, it will continue to be relatively painless for the US to rack up huge deficits and debts. Certainly, other large economies in the world are doing the US a favor by being even more debt-ridden and fiscally unpredictable than the US. So, US debt looks relatively attractive.

When the Spending Binge Ends

However, when the day arrives that US debt suffers from declining global demand (whether for economic or geopolitical reasons), maintaining the spending spree will suddenly become a lot more expensive. That 6 percent of the federal budget will get a lot bigger, and programs like Medicare, Medicaid, and Defense will all be faced with significant cuts to service the debt.

Americans do not want to see any cuts to any of their favorite programs (which is all of them). Thus, the political will to cut budgets will never come domestically. It will be forced on us when foreigners begin to dump US debt and force up its price.  In other words, the decision to slash benefits will be made for us by global investors.
Graphs by Ryan McMaken.
Posted by Ryan McMaken at 10:33 AM