The Pew Charitable trusts recently released new data up through 2013 on federal spending in the states.

If we look at federal spending as a proportion of each state's overall GDP, we find that the recipients are not exactly evenly distributed: 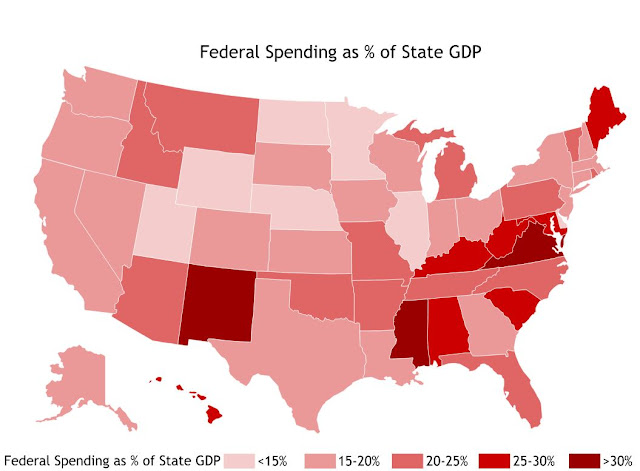 These are proportional numbers, so they are a function of both the amount of federal spending as well as the overall size of GDP. So, in California, for example, which receives immense amounts of government spending, is nevertheless a state where federal spending is offset by a very large private sector. In a more rural state with few major private industries, such as New Mexico, the state shows up as being highly reliant on federal spending. 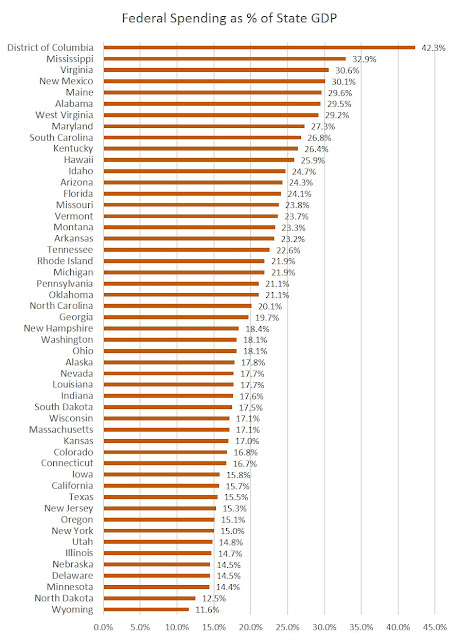 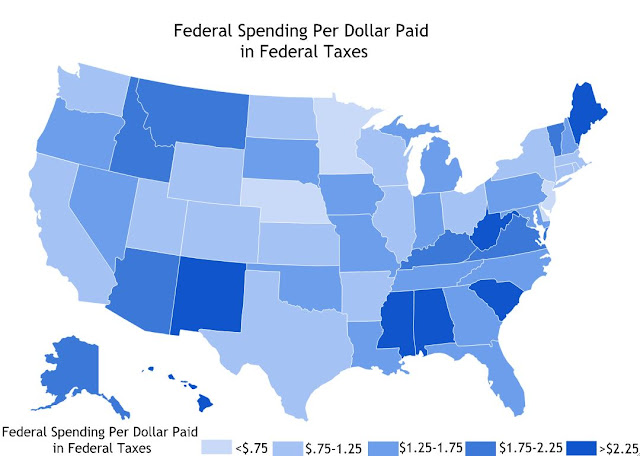 I've divided this graph up into "net tax payer states," "break-even states" and "net tax receiver" states. The lightest shade of blue are states that, by far, pay in more than they receive back, such as New Jersey and Minnesota. The next lightest shade of blue are states that are more or less "break even" in the sense that spending and tax collections hover somewhat around a 1-for-1 relationship. The darker blue states are states that receive considerably more in federal spending than they pay in taxes.
Here are all states, including values: 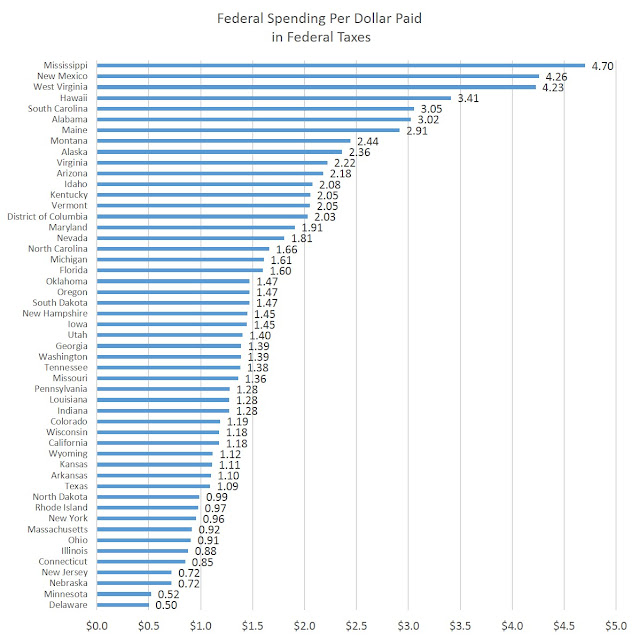 Naturally, these values aren't spread evenly within the states themselves, either. Areas that are more rural and reliant on agriculture will tend to be net tax receiver areas both because farmers and ranchers receive a lot of government subsidies, and also because agricultural work tends to have lower productivity than urban work.

Urban areas, in contrast, produce most of the tax revenue, so highly urbanized states will tend to more often be "break even" or "net tax payer" states.

One thing that must not be ignored is the fact that the US government spends more than it takes in nationwide. During 2013, for example, the federal government spent a dollar for every 80 cents it took in via taxes.

Nationwide, the tax-spending ratio is not one dollar, but it about $1.20. So, states that are getting around $1.20 back for every dollar extracted in taxes are really just at the national average.
This is being made possible by old-fashioned deficit spending and also by monetization of the debt which the Federal Reserve facilitates by expanding the money supply. Once interest rates rise or the international value of the dollar begins to fall significantly, this sort of overspending will no longer be possible, and many states will find themselves in dire straits. (States that are "net tax payer" or "break even" states will adjust the best to any significant disruptions in federal spending.)