In terms of homicide, Colorado among the safest places in North America

As I explained here, I think it's useless to speak of indicators like poverty or homicide in terms of a huge place like the US or Mexico. Regional differences are so large, and so many demographic variables are different form place to place, that it's useless and even dishonest to make such comparisons.

So, I prefer to look at things at the state level, or preferably at the metropolitan-area level, if the data is available.

People often speak of the US homicide rate as being unusually high, but that really relies on a couple of mistakes in examining the data. First, those who say such things usually make the arbitrary choice of excluding any country in the analysis except the so-called "developed countries" by which they really mean Western Europe. To do this, of course, excludes a huge portion of humanity, and there's no reason why a country not currently at war, like Brazil or Russia, for example, should be excluded from the analysis. (Both have much higher homicide rates than "the US," by the way) The other mistake is to compare a country the size of Finland (with 5 millions people in essentially one metropolitan area) to the United States with 320 millions people and dozens of large metro areas.

So, if we drill down a bit more, we see quickly that high homicide rates are really a regional issue in the United States, and not a nationwide issue. Let's look at both the US and Canada together: 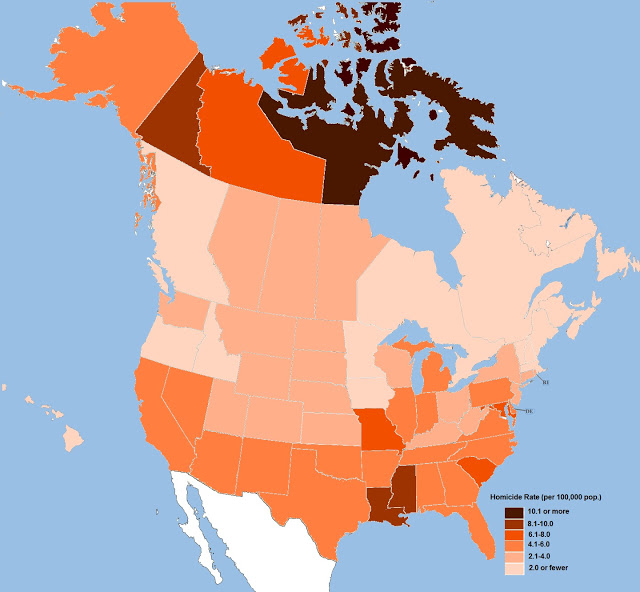 We quickly find that the Northern US is quite comparable to Canada, which has a reputation for being remarkably safe. . And we also see that Colorado is in the second-to-lowest —low being good— category for homicide rates.

The chart shows a more exact comparison among the states and provinces (Canadian provinces in red): 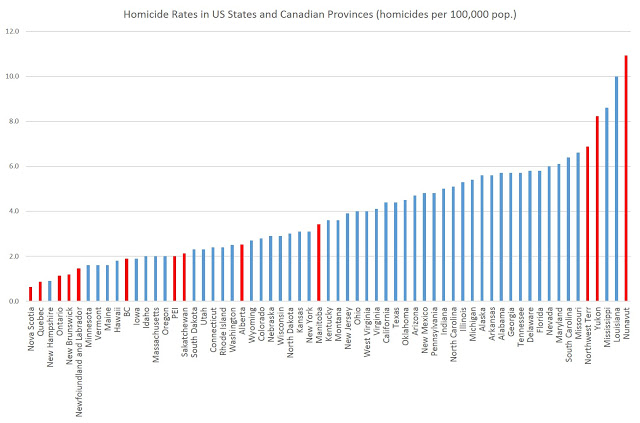 Moreover, we might note that Colorado is also among the safest places in the Western Hemisphere since homicide rates in the Caribbean and South America tend to be much higher than even the American South.
Posted by Ryan McMaken at 10:11 PM