Measured in new building permit activity, multifamily building in the Denver-aurora metropolitan area appears to have peaked in 2014, and has been slowly declining since.

Using the Census Bureau's residential building permit data for this metro, we can look at how many permits were for buildings with more than one housing unit. In other words, this data is NOT for single-family houses, although townhouses are included. (This also includes for-purchase condos, so we're not talking only of apartments here.)

Since month-to-month swings are so large for these types of units, I've put it together looking at three-month moving averages (includes data up through December 2015). All the graphs in this article are for the Denver-Aurora metro area: 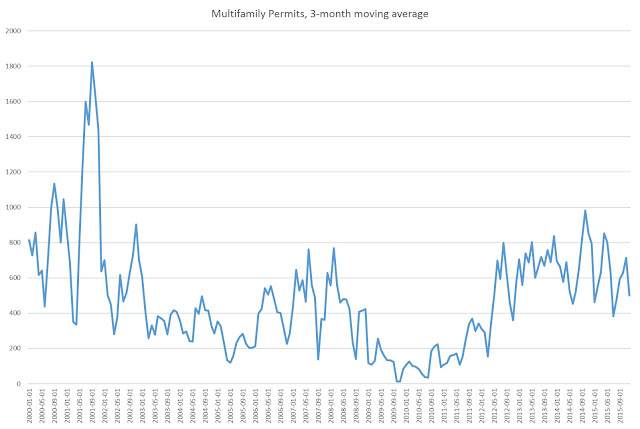 What we see here is that the 3-month average through December 2015 was 500 units which was down from the 3-mo average for November 2015, which was 713. This is all down from the peak of 983 units reached during October of 2014. Overall, we do appear to be seeing a slow downward trend that's been in place since the fall of 2014.

Generally, permit activity remains above what it has been over the past decade, although not equaling the huge multifamily housing boom that occurred at the very end of the dot-com boom back in 2001-2002.

Measuring the percent change year over year, we find that December's three-month average was down 37 percent, year over year. That's the largest drop recorded since August 2010, or 65 months ago: 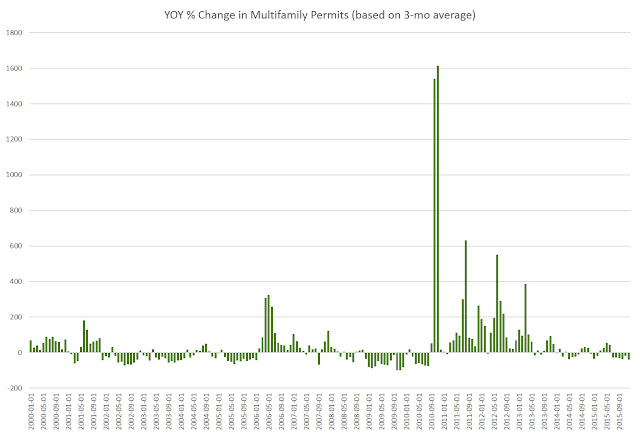 In fact, 8 of the past months have shown negative growth by this measure, suggesting multifamily builders are definitely pulling back from the big-growth period that lasted from 2010 to 2013.

Building permits can be seasonal as well, although multifamily tends to be less season than single-family. However, let's look at the totals separated out by month so we can better take seasonal factors into account. 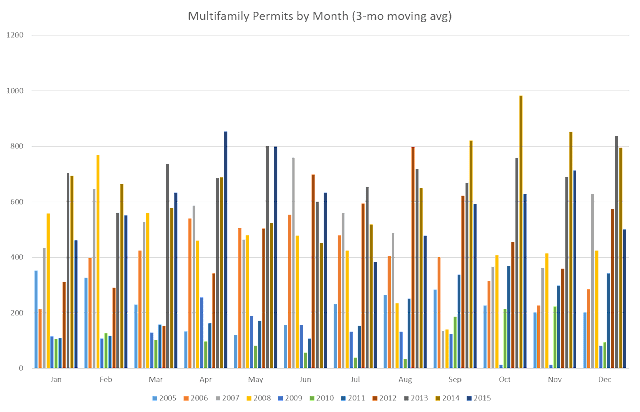 The most recent vacancy and rent data for the metro area suggested that demand is softening, with the vacancy rate hitting a six-year high. There were questions about whether or not the industry had overbuilt. It's possible, although, even with condos included in this data, it seems that the industry has already been in the process of winding down from peak levels for more than a year.