The first graph shows single-family permits, by month, over the past fifteen years: 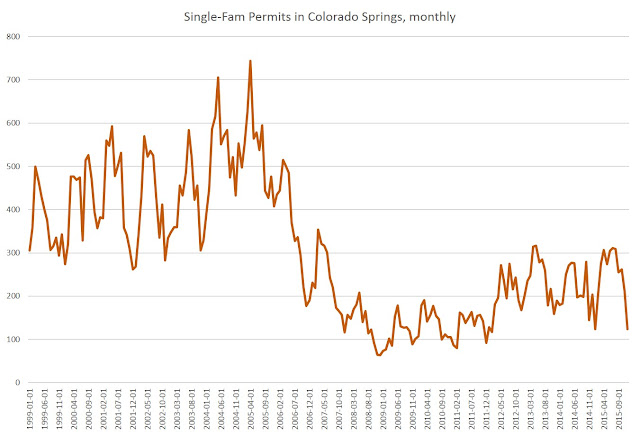 During 2015, permits peaked during the summer, as usual, with 311 permits reported during July 2015.

For December, though, if we compare to other Decembers, in order to take seasonal factors into account, we find that December 2015 was the least active December in four years: 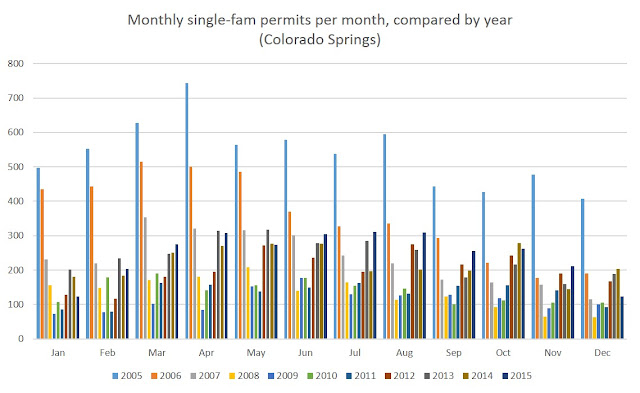 December's numbers are not enough to suggest a downward trend in themselves, although the trend since 2012 has rather clearly been a flat one, with little movement up or down.

Nevertheless, sedated permit activity may be reflecting lackluster job growth that has been a factor in the local economy.

But what about multifamily permits? Multifamily activity is so sporadic from month to month, it's difficult to see much from monthly data, but with the end of 2015, we now have annual data for 2015. Looking at the year as a whole, we find that 2015's multifamily-family permit total was the lowest recorded since 2012, and is thus at a four-year low: 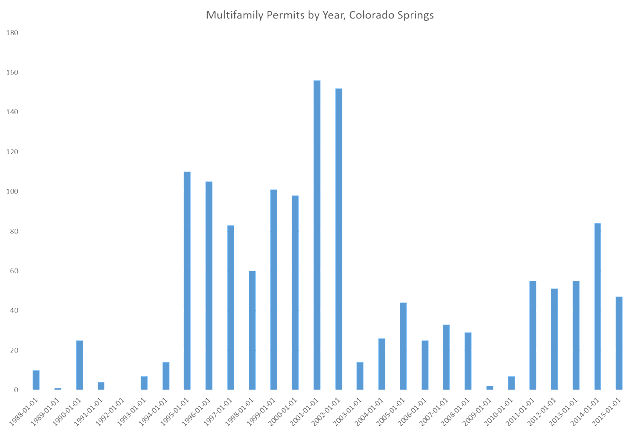 2015's multifamily development appears to come from a single project.

Not surprisingly, we also see that the average rent in Colorado Springs has been heading upward in recent quarters as little growth in new supply leads to a squeeze on existing housing supply. A lack of solid growth in single-family construction will contribute to this as well.

There are no dramatic trends to identify here, although it does not appear that the Colorado Springs economy is something we would call "robust." For now, the housing economy in the region shows signs of holding steady, although continued declines in job growth growth will lead to declines for housing demand in the region.

(All permit data is from the US Dept. of Commerce.)
Posted by Ryan McMaken at 4:11 PM