Along with the Denver area, Northern Colorado — i.e., the Greeley and Ft Collins metro areas — has long been one of the more economically robust parts of the state. This has held true since the end of the 2008-2009 recession, with significant job growth in both metro areas.

Historically, Ft Collins has tended to see more growth than Greeley, but thanks to recent growth in oil jobs, Greeley has experienced very large growth levels. 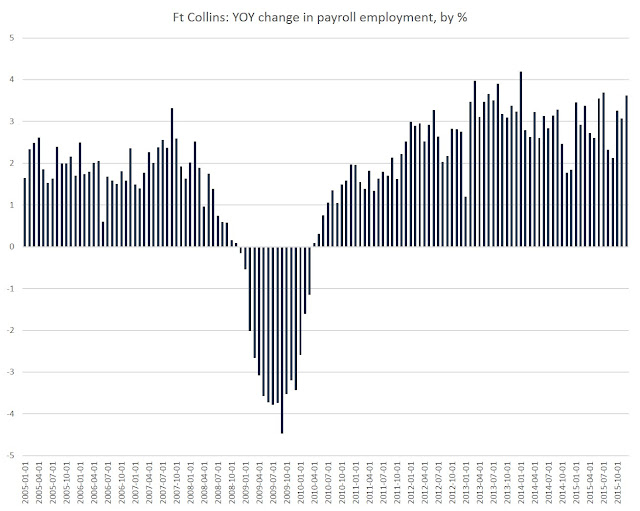 In fact, job growth in the Ft. Collins area has outpaced the last expansion from 2003 to 2007, when job growth hovered around 2 percent.

Meanwhile, in Greeley, job growth reached very high levels, topping out at 9.7 percent during July of 2014. Across Colorado, job growth rates have tended to come in below five percent over the past 20 years, so the job growth rates over 7 percent in Greeley during 2014 and early 2015 do show remarkable growth in employment in the region.

Much of this growth was due to the growth of oil extraction jobs in the region, and not surprisingly, we have seen that growth taper off as the price of oil has fallen quickly over the past year. Nevertheless, with job growth rates still near four percent, it would premature to say that job growth in the Greeley area is looking to disappear. 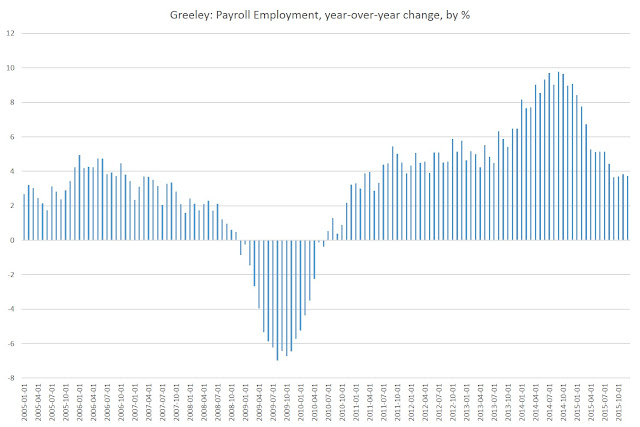 Clearly, a decline in the demand for oil jobs has affected the region, but it's not clear just how large of an impact this will have.

Data source: Data comes from the BLS's establishment survey which features payroll employment, and thus measures the number of jobs in the region. This is not to be confused with the Household Survey that measures number of employed persons.

(All employment data is from the Bureau of Labor Statistics. These numbers are from the "Establishment Survey.")
Posted by Ryan McMaken at 8:37 PM