Nevertheless, the US homicide rate remains near a 50 year low, and 2015's rate is comparable to homicide rates found during the late 1950s when the US was in the midst of a historical lull in homicide rates.

In Colorado, we find a similar situation. 2010's homicide rate was the lowest recorded since 1960, with 2015's rate up from that. However, the overall trend has generally been flat over the past ten years: 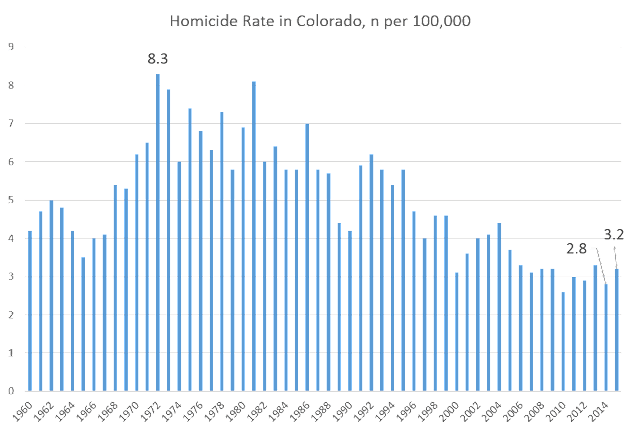 We see little to suggest that the legalization of recreational cannabis use has led to any sizable increase in homicides, or that gun control measures in recent years have had any impact that is measurable.

Colorado's homicide rate increased 14 percent from 2014 to 2015, compared to a ten percent increase for the nation overall during the same period. 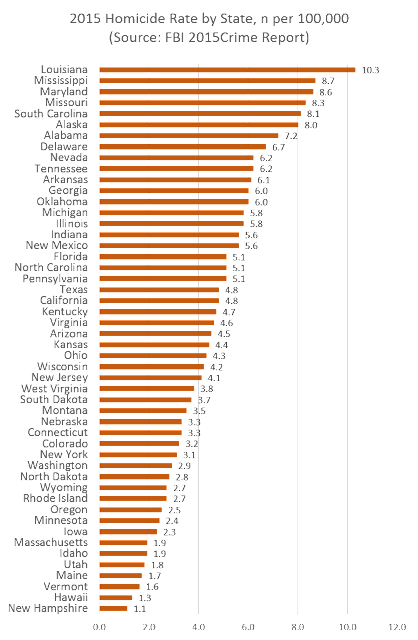 For additional reference here is a map of all states: 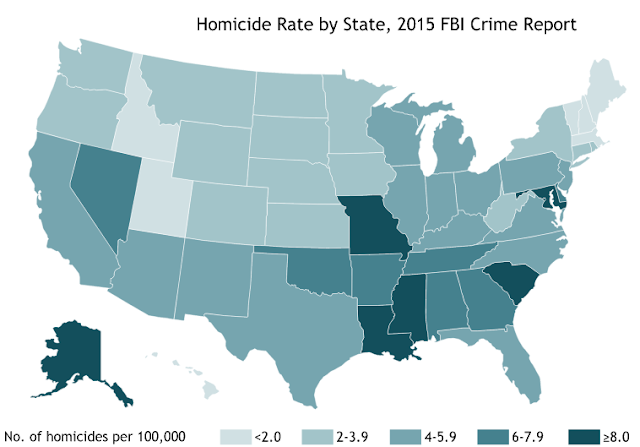 As The New York Times and New York magazine recently reported, the nationwide increase in homicides was largely driven by increases  in violence in seven large cities nationwide. Denver was not among them.


A with the nation overall, Colorado's homicide situation varies geographically. Within the state's metropolitan areas, the homicide rate ranges from 0.9 per 100,000 in Boulder to 8.0 in Pueblo. Pueblo's homicide rate is higher than both the statewide rate and the nationwide rate: 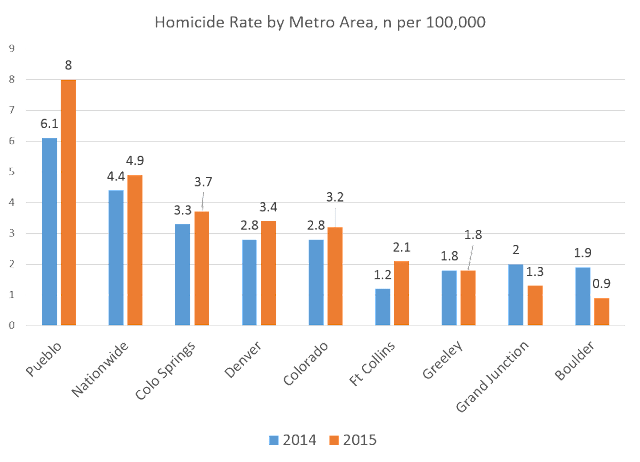 Homicides increased in Pueblo, Colorado Springs, Denver, and Fort Collins. The rate in Greeley was unchanged. Homicides decreased over the year in Grand Junction and Boulder. Colorado overall remains remarkably safe in terms of homicides. With homicide rates around 2 per 100,000, northern Colorado and Western Colorado are among the safest places on earth.

In areas outside of Metro Denver, we're generally dealing with small numbers. Pueblo's total homicides increased 30 percent from 2014 to 2015, but that's an increase from 10 to 13 over the period. This hardly indicates an established trend toward an epidemic of violence. Nevertheless, one would prefer to see movement in the opposite direction.