Most of the employment data used in economic trends analysis depends on survey data using samples. This data can be useful, but it's always helpful to have other sources to provide context to the data.

One way to analyze trends on an annual basis is to use tax return data. Tax return data, of course, is especially reliable because misrepresenting income on tax returns can bring stiff fines and even jail time.

Looking at the total number of filers putting in income tax returns, we see the following trend: 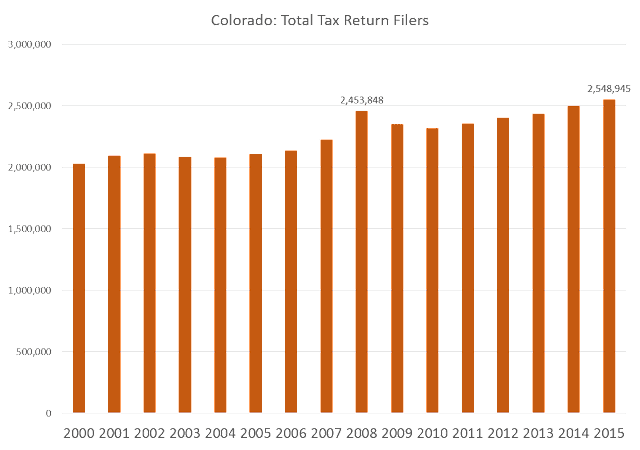 Not surprisingly, as job growth surged at the end of the last economic boom, we saw total filers peak in 2008. After that, it took six years for total filers to return to where they were. Now, the total number of filers includes more than just full time workers. It can include people with other sources of income as well. Nevertheless, this does gives us some insight into how much job creation was taking place during this period.

What we do find is that the last economic downtown was indeed rather severe, especially when we note that during the post-2002 downturn, filer totals returned to the former peak after only three years.

Since 2014, filer totals has exceeded the peak.

As a second measure, we can also look at average tax collections. We find this by dividing gross tax collections (including individual income tax, employment taxes, and estate and trust income tax) by the number of income tax filers. This is just an estimate of total income taking place, of course, but using the same methodology over time, it does provide us with a trend. 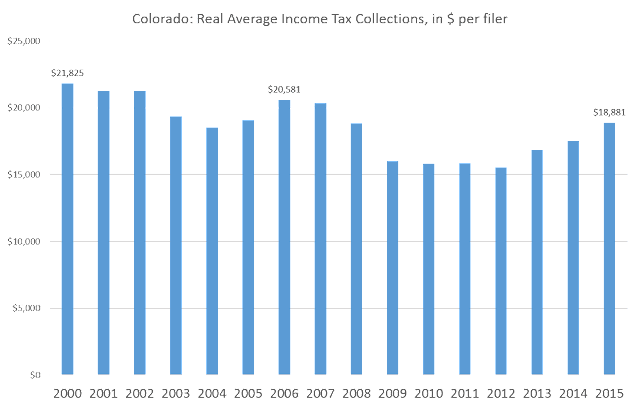 I have also adjusted this for inflation (using the CPI). What we find here is that real real average income tax collections have been declining over time.

Some of this may be due to people voluntarily retiring and accepting less income — and thus, a lower standard of living. But in many cases, it may also reflect declining real wages and a decline in the number of work hours. For example, we do know that nationwide, the number of workers who are involuntary part timers has been significantly higher during this cycle than during past cycles.

In an earlier post, we also noted that real incomes in Colorado have been flat or declining, depending on the measure. We see a similar trend here to that found in median household income in Colorado (see original post): 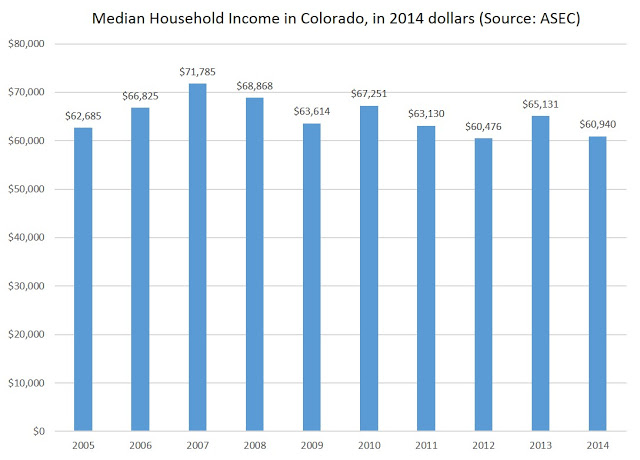 Note: All data comes from annual "Internal Revenue Service Data Book." Calculation based on total  income tax collections found in Table 5. This is then divided by filer totals (individual income taxes) found in Table 3.
Posted by Ryan McMaken at 9:02 AM