According to the most recent employment data from the Department of Labor and Employment, there were  approximately 101,00 payroll jobs in Greeley during July 2016. That's up from the 98,000 jobs estimated during July of last year. However, total payroll employment in the region has gone only sideways since 2014.

In October of 2014, there were 102,000 jobs in the Greeley area, but since then, payroll employment has never exceeded 102,000 positions. In other words, employment growth has been flat for the past two years: 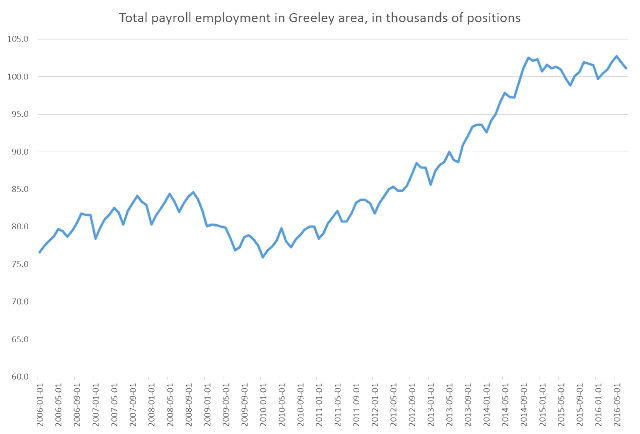 Compare this trend to the one in Fort Collins, right next door. In the case of Fort Collins, the overall job trend mirrors that of the state overall with an unbroken upward slope since 2009: 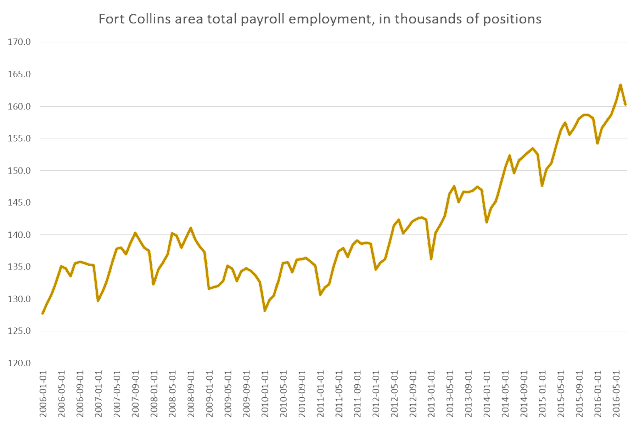 Since 2014, unlike Greeley, Fort Collins has only continued upward on the same trend as before.

Oil prices, not surprisingly, appear to be a big factor in this trend in Greeley. Last December, for example, The Tribune reported that "Colorado's oil rigs drop to lowest in 13 years." By May of 2016, the Denver Post was reporting that rigs had dropped to a 16-year low.

This has had an impact on employment in the area, and we see it in the numbers.

In fact, during a seven month period in late 2015 and early 2016, job growth actually turned negative in the Greeley area. Meanwhile, the state of Colorado overall has not experienced year-over-year losses since 2010.

Here are the Greeley YOY changes. During July 2016, job growth was up 2.3 percent. But, that is on the fourth month in a row of growth following a period of decline. The graph shows how job growth began to disappear in 2015: 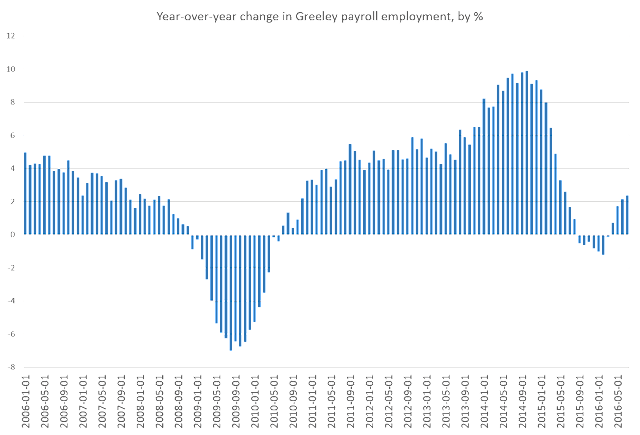 We can contrast this with the same time period in Fort Collins where job growth remains solid throughout the period. In July of 2016, there were 160,000 payroll jobs, which was an increase of 3 percent of the previous July.  In Fort Collins, that's a continuation of the general trend we've seen since 2012: 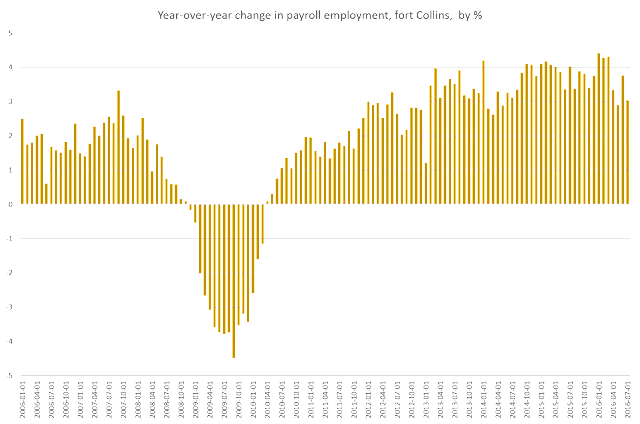 Of course, the decline of employment in Greeley doesn't mean there are immense numbers of unemployed people in Greeley now. Many of the newly-unemployed workers in Greeley moved away, as many of them were not native to Greeley in the first place. On the other hand, those temporary workers did often spend their wages in Greeley, enriching local businesses. Now that many of those workers have gone will mean a scaling back for the Greeley economy.

The magnitude of this remains, to be seen, however, and it look like the Greeley area has already returned to a period of job growth. For now.

Note on data: All this data comes from the "Establishment" survey of employment which measures payroll positions. It is different from the Household survey that is used to calculate the unemployment rate and which measures employed persons. Thus, the establishment survey can include part time positions, and a person holding two jobs could show up as two jobs in the establishment survey data.
Posted by Ryan McMaken at 9:22 AM