The Metro Denver Apartment Association released first quarter 2015 vacancy and rent data late last  month, and we find that year-over-year rent growth hits exceptionally high levels for the second quarter in a row. The average rent during the 1st Q 2015 was $1,203, compared to $1,073 one year earlier. During the 4th Q of 2014, the avg rent was $1,168

The first graph shows the average rent for all quarters recorded since the survey was initiated in teh early 1980s by Gordon Von Stroh. Obviously, rent growth since 2012 has been significant. If we just eyeball the graph, we can see that the rate of growth in recent years has outpaced most other periods. Even during the late 1990s during the tech boom, rent growth was not as strong as it is now. These numbers are not adjusted for inflation, and during the period from 2003 to 2009, rent barely exceeded the CPI growth rate during many periods. But, rent growth is now well in excess of CPI growth. 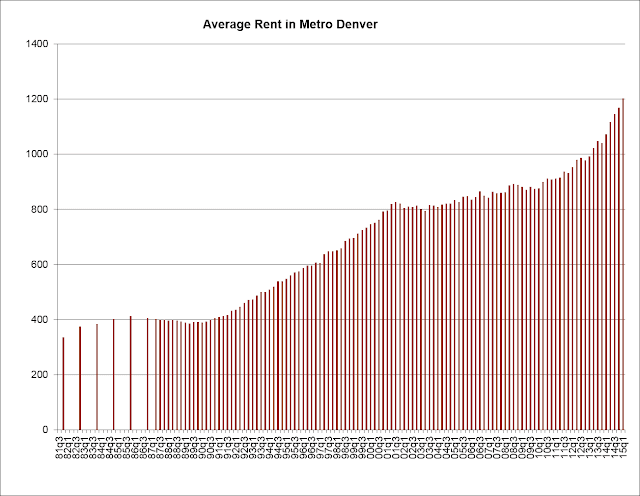 If we want to really quantify just how strong rent growth has been, we can look at the year-over-year change for each quarter. The next graph shows this, and we see that for the 4th Q of 2014 and the 1st Q of 2015, rent growth is the highest is has been in 30 years. During the 4th Q 2014, the YOY change was 12.19 percent, which is now the highest YOY increase ever recorded. During the 1st Q 2015, the growth rate came down slightly to 12.11 percent. But, it's a little silly to talk about these estimates out to the hundredths place, so to be more realistic, we can just say that for the past two quarters, rent growth has been tied at a record high of 12.1 percent. 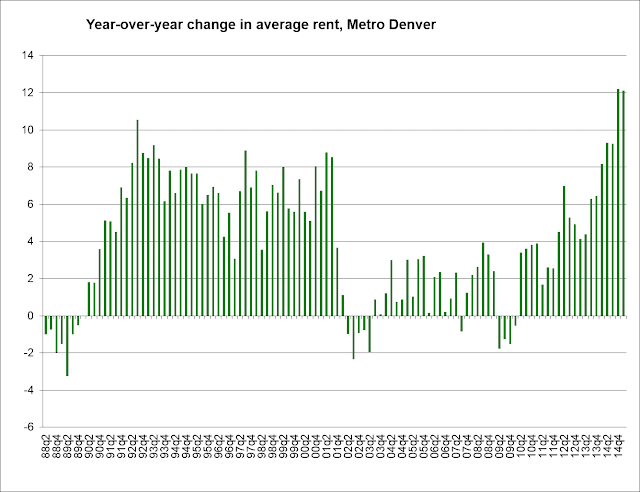 And why so much rent growth? Demand is high. The vacancy rate for metro Denver during the 1st Q 2015 was 4.9 percent. That's up from the fourth quarter (which tends to be a high-vacancy quarter) but year over year, the 1st Q's vacancy rate was below 2014's 1st Q rate of 5.1 percent. For the past four quarters, the vacancy rate has been below five percent, which is quite low for this market. Looking at the past thirty years, we see that vacancy rates are near very low levels, although not where it was during the very tight late 1990s.

But if the vacancy rate is not at record low levels, why is rent growth at record high levels? Part of it is due to the fact that most of the new product is luxury or fairly high end product. (This is average rent and not median rent, so the number are skewed up slightly by very expensive new product. Median rents, however, show similar trends.) Also, with so few homes for sale due to fairly lackluster rates of new home construction and low inventory, there are few options renters have outside renting. Thus, rents continue to move upward rapidly. 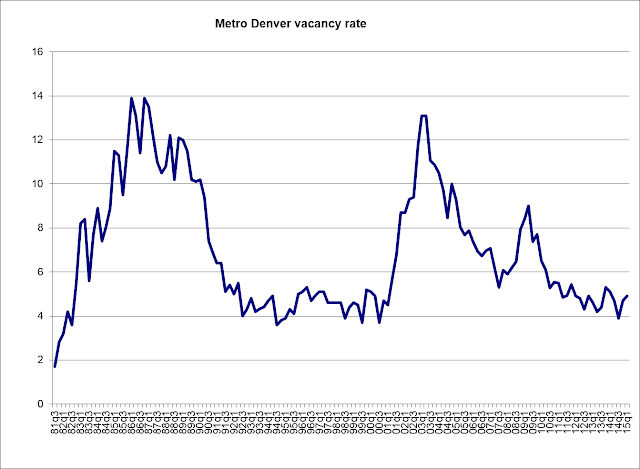