Back in September, when we thought that the Fed might raise rates, The Economist noted that "The last time the Federal Reserve raised its benchmark interest rate, there was no one to tweet about it," because Twitter did not yet exist. Moreover, Zero Hedge ran a somewhat amusing article reminding us of what the world was like the last time the target rate was above 0.25. Remember Nelly Furtado? George W. Bush was still president back then, too.

The sheer length of the Fed's flatlining has made it seem that a move to a 0.5 target rate is an immense change. Here's what the huge change looks like: 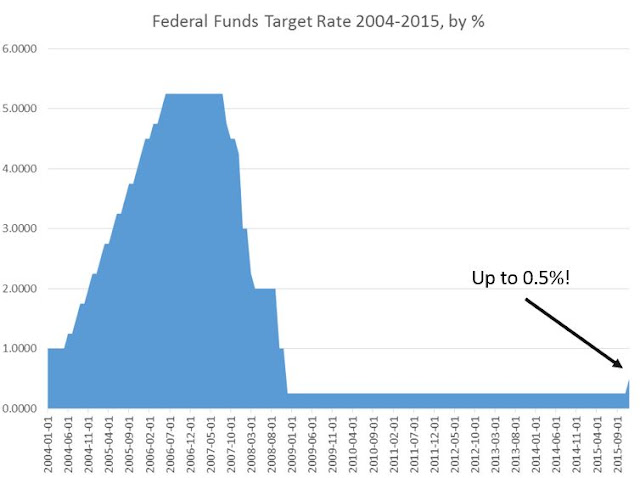 The fact that this is being labeled such a large change underscores just how fragile the current economic "recovery" is. Ever since 2009, the Fed has been telling us that its monetary easing will help the economy regain its footing, and then momentum will take over from there. We're still waiting.

Median incomes are falling, workforce participation is down, and housing is becoming more unaffordable. But, the fed may have figured out that if the economy's going to be lackluster anyway, the Fed might as well try to regain some of its credibility by letting rates inch up ever so slightly.

It could be worse, though.  We could be living under the European Central Bank which is doubling down on negative interest rates.  Nevertheless, Europe's future may soon be our future, since, as many Fed critics are predicting, the increased in the Fed Funds rate is really just a temporary measure. We may see the economy stall even more in the face of higher rates, at which point the Fed will quickly use the opportunity to return rates to zero or even negative.

At this point anything could happen. We live in such an abnormal economic world right now, it's hard to guess much of anything.  After all, it wasn't all that long ago that the Federal Funds Rate was between four and six percent.

On the other hand, I'm an old man of 38 years, so I can remember the ancient world of the 1990s, albeit I was a teenager at the time.  Some people working at the Fed, though, don't know, in practice, what it even means to raise rates. 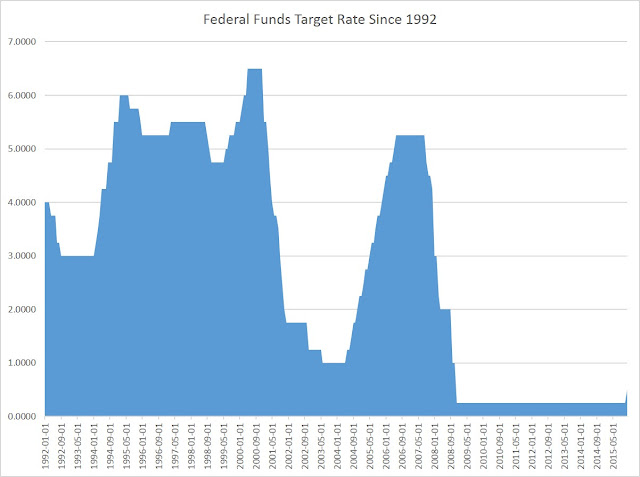